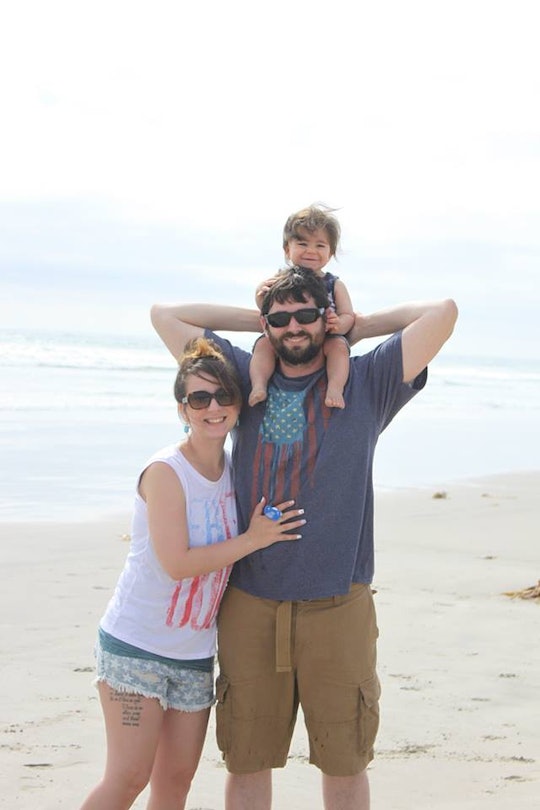 When It Comes To Gun Control, My Partner & I Don't Agree

I’m sitting on the couch, watching CNN while my son plays on the living room floor, when my partner walks through the door. I look at him casually, keeping one eye on the television as I ask him if he is aware of the latest mass shooting. He cuts me off before I can even say “San Bernardino,” nodding his head, asnwering that yes, he knows what's going on. He takes off his coat and picks up our son and asks how long I plan on watching the news. On December 2, a shooting helmed by two suspected gunmen took place at San Bernardino (one of whom was a woman, officials note), resulted in the deaths of 14 people and upwards of 21 people were wounded at the Inland Regional Center, a center providing care for individuals with developmental disabilities.

My partner and I have very different reactions to what has sadly become a normal occurrence in the United States. I want to devour as much information as possible so that I can be aware and informed. One day, my son will ask me what is going on, and it'll be my job to have all the answers (or as many as I can give). My partner wants to play with our child, watch a funny movie, and not listen to any of it at all. He wants to be in The Now, savoring it. Honestly, I can’t blame him, and at times I am jealous of his ability to turn it all off when I feel like it's disrespectful to even change the channel.

Our reactions aren’t our only difference, and we both know that whenever a loss of life happens at the hands of some radicalized terrorist or angry employee or disturbed young man or racist police officer, we will inevitably end up in a debate about gun control.

My partner is from the Midwest and served our country in the United States Navy. He grew up around guns, has been trained extensively with guns, and genuinely enjoys shooting guns. I grew up with a police officer for a father and knew we had guns in our home, but I am uncomfortable around guns, have never been trained with guns, and can’t stand holding, let alone shooting, a gun. We’re on opposite ends of the gun spectrum, so when it comes to gun control, we do not agree.

When we found out I was pregnant, our first substantial argument was about having guns in the house. My partner has always had a weapon in his home, and while he is a very responsible gun owner — he keeps it locked, keeps it unloaded, out of sight, and hidden — the thought of a firearm being accidentally found by our future child was something I couldn’t handle. I wanted to get rid of the two guns he had, and to get rid of them immediately. He believed that because he would now have a child to protect, there was no way he was going to be getting rid of them. I said now that I was going to have a child to protect, I had to erase any possibility of him accidentally shooting himself.

I realized that while we had so many things in common, there would be times when parenting a child together would be difficult.

We compromised as best as we could, and now we have just one gun in our home. It's locked up, unloaded, hidden, and well out of reach of our 1 year old. It was the solution that worked best for the two of us. From time to time, we still debate the relevancy of having a gun that’s unloaded in our home, but we found common ground: he feels safe, I feel safe, and we both feel like we are keeping our son safe in our own way, and that is the most important thing.

Which is why our differences concerning and regarding gun control laws have actually shown themselves to be good things. It isn't the answer for everyone, obviously, but my partner and I are able to have debates and in-depth, passionate conversations about a polarizing topic, without screaming or fighting or calling one another names. We are able to raise an actual human being, peacefully and lovingly and together, by working to establish a compromise we're both happy with — even though I would be completely fine with nation-wide radical gun control and he'd never allow the government to take his guns away.

We're able to still facilitate a healthy environment in which we can both voice our own opinions, really hear the other person, and learn from one another, even though these continued, tragic shootings highlight this fundamental difference between us.

My partner sets our son back down on the floor and sits next to me on the couch. He watches a few minutes of CNN before asking me questions. “How many victims?” he asks, looking at our peacefully oblivious son before turning to look at me. “Too many,” I tell him, and as the number flashes on the screen we both shake our heads, look back at our wide-eyed child, and sigh. I know we’re on the verge of another debate, and we’ll both start pulling up statistics in support of our cause, searching for the common ground not even or congresspeople can find.

We've done what we can to feel safe, putting the needs of our child first and foremost. Both of us, defiant in our beliefs, hoping that one day soon our lawmakers will be able to do the same.

More Like This
How To Approach The Topic Of Emotional Labor With Your Partner
How To Ask Your Partner For Support When You Need It
Ginger Zee Had A Perfect Response After A Troll Asked Her "Who's Raising Your Kids?"
This Is What Happens To Your Vagina When You Stop Having Sex