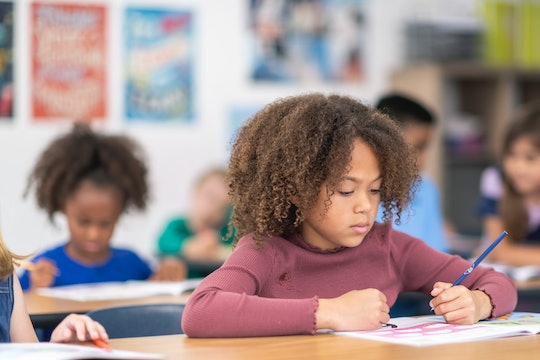 After years of mumbling under my breath over math homework, science decides to tell me now that it was a good thing all along. That's right, according to a recent study, when kids talk to themselves during math tests, it turns out that it could actually help improve their skills and abilities. Researchers behind the study suggest that parents encourage children to repeat mantras to themselves like, "I will do my very best," during tests and homework, encouraging effort over ability.

The new research, published on Tuesday in the journal Child Development, looked at 212 Dutch children between the age of 9 and 13. Researchers honed in on this age group because it is a time in adolescence when "negative beliefs" about children's abilities become more common, the study noted.

"Parents and teachers are often advised to encourage children to repeat positive self-statements at stressful times, such as when they're taking academic tests," Sander Thomaes, professor of psychology at Utrecht University and lead author of the study, explained in a press release. "But until now, we didn't have a good idea of whether this helped children's achievement. We discovered that children with low self-confidence can improve their performance through self-talk focused on effort, a self-regulation strategy that children can do by themselves every day."

Researchers found that those who engaged in self-talk about their efforts had improved performance in the second half of their test. The benefits were most pronounced in those children who held negative opinions of their abilities prior to testing. But those children who engaged in self-affirming talk about their abilities did not improve their scores at all, regardless of their belief in their competence.

Eddie Brummelman, assistant professor of child development at the University of Amsterdam and study co-author, explained that the type of self-talk that children engage in is the deciding factor in whether or not talking to themselves actually helps with performance.

Along with helping in math, positive self-talk can help to improve children's performance in other areas as well. A 2013 study found that when children encourage themselves in this way, they perform better in sports such as handball. Positive self-talk has also been linked to improved self-esteem and self-image, as well as lower levels of anxiety and depression, according to the national public health information service in Australia.

Researchers noted that their findings come from one small study, conducted exclusively in the Netherlands, on one specific age group. But even if there's a chance that letting my kid mumble mantras of self-encouragement is going to help her overcome perceived limitations, I'm here for it. Heck, maybe it'll even help me come tax season.

More Like This
Prince William Was Quick To Remind Someone That He Does School Drop-Off Duty Too
The Little Vampire Is Just Scary Enough
Exclusive: Three Siblings With Super Powers Protect National Parks In Spirit Rangers
Watch An Exclusive Clip From Trick or Treat Scooby-Doo!