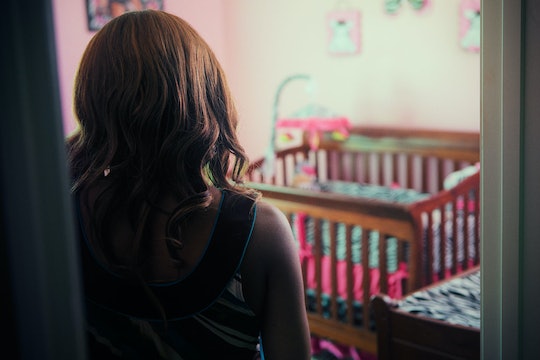 On June 1, at midnight, Missouri will become the first state in the country to "go dark" — there will no longer be a clinic that provides abortions in Missouri.

And moms will suffer.

As of today, the Planned Parenthood in St. Louis is the only clinic that provides abortion in the entire state of Missouri. It's currently under audit with the state, according to The New York Times, and the demands of the audit have postponed the renewal of the clinic's license. If that license is not renewed, the clinic will no longer be able to legally provide abortion care, making Missouri the first state to no longer offer abortions since 1974.

And just last week, Missouri's governor signed into law HB-126, effectively banning abortions past eight weeks gestation, before most people know they're pregnant. The law is scheduled to go into effect in August, according to Vox, but will undoubtably be challenged in court.

Those championing these bills, and actively trying to shut down the only remaining clinic that provides abortion in Missouri, would have us all believe their efforts are for the benefit of mothers. Of children. Of families. But the majority of people who have abortions are moms (59 percent, according to the Guttmacher Institute), and one of the reasons why those moms choose abortion is because they wouldn't be able to adequately care for the children they have if they were forced to carry another pregnancy to term. And when mothers cannot access the abortion care they want and need, their health, their children's health, and their families' quality of life suffers.

States with the highest number of abortion restrictions also have the highest rates of maternal and infant mortality.

And due to Republican efforts to block the expansion of Medicaid in the state, 13.9 percent of women ages 18 to 44 are uninsured, a study by the Georgetown University Center for Children and Families found. The national average of uninsured women in the same age bracket is 12.3. So healthcare is very much a concern for residents of Missouri.

Studies have shown that states with the highest number of abortion restrictions also have the highest rates of maternal and infant mortality. The children of women who are denied access to abortion care have a higher chance of living below the poverty line, a higher likelihood of living in a home without enough money to cover food, housing, and transportation, and likely a more difficult time achieving developmental milestones, a 2019 paper published in Pediatrics found. Pregnant people who are denied abortion care are more likely to develop short-term mental health problems, like anxiety, depression, and low self-esteem, a longitudinal study published in JAMA Psychiatry in 2017 reported — problems that could potentially impact a person's ability to care for their children.

Taken together, we see that rather than address maternal mortality, infant mortality, and childhood poverty, Missouri lawmakers have opted to exacerbate challenges to the livelihood of parents, pregnant people, and children by cutting off access to crucial reproductive care.

So it won't just be the GOP-fabricated "feminazi" man-hating, baby-eating she-devils who will suffer if Missouri's last remaining clinic that provides abortions shut down. It will be moms. It will be children. It will be families — the very people the so-called "party of family values" claims they represent, protect, and uphold.

Instead of impeding on the personal decision to have a common, safe, legal, sometimes life-saving medical procedure — a decision that often benefits families and aids parents in taking care of their children — Republicans and those seeking to eradicate the constitutional right to abortion care should be focusing on bills that highlight and combat the nation's rising maternal mortality rate.

They should be passing laws that close the wage gap, so that moms in the state of Missouri and beyond can be paid the same amount of money as dads. They should be championing comprehensive sex education and making multiple forms of birth control affordable and easily accessible: two actions known to lower the number of unplanned pregnancies and abortions.

They should be trusting pregnant people to make their own health care decisions, instead of punishing them, their children, and their families.

Because when clinics that provide abortions close, and access to abortion vanishes, it's moms who suffer the most.