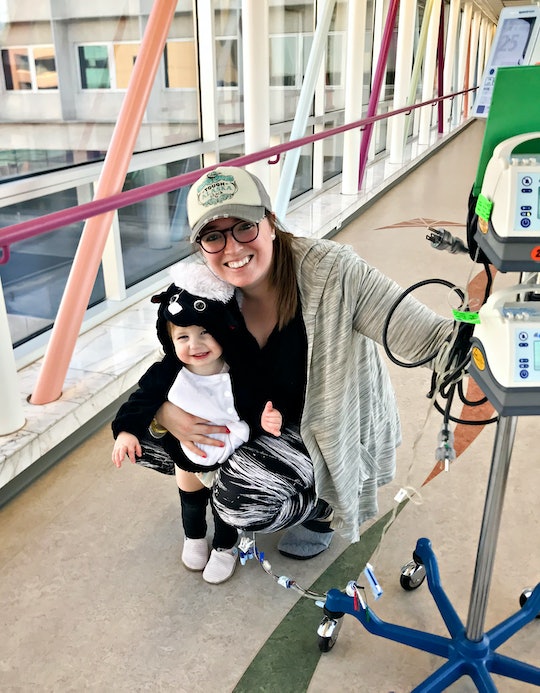 I Am Waiting For My Daughter’s New Heart

My youngest began getting sick over the summer, just a couple weeks after her first birthday. My “mom intuition” started to nag at me that something wasn’t right with her. She was acting differently. Something was off. Her appetite started to decrease, her diaper output became minimal, she was breathing quickly and she was more tired than usual. After a quick trip to an urgent care, I was assured that she was just teething and it would pass. Days went by and that “mom intuition” continued to weigh on me so we made an appointment with her pediatrician shortly after.

More Like This
Vaccinated People Can Ditch Masks. Where Does That Leave Kids?
Moms To Toddlers Everywhere: This Aggression Will Not Stand, Man
This Problem-Solving Toddler Filled Up His Toy Car With “Gas” From The Garden Hose
The 7 Best Water Tables For Your Little Ones

With a single diaper in tow (fourth child problems), I thought I would be back in an hour with some medications to fix whatever was going on with my baby girl. After multiple tests and a chest x-ray, we were immediately sent to the local Children’s Hospital Emergency Room. I was still in denial at this point. I assumed my daughter just needed some IV fluids or some brief monitoring and we would be home later in the evening or worst case, the next day. But then it was discovered that our baby girl had a very serious heart condition and would need to be admitted to the Pediatric Intensive Care Unit.

The ER cardiologist was kind but didn’t beat around the bush. He spoke slowly, knowing it would be hard to comprehend what he was going to say. He said my daughter was in heart failure and she was going to need immediate hospitalization. He went on to say she had a one-in-three chance of surviving. My mind wasn’t able to process this devastating news. I was in complete shock. I felt numb. I felt sick. I wasn’t at all prepared for any of this. For heaven’s sake, I brought only a single diaper. All I could do was sob while my sick baby lay lethargically in my arms. We were wheeled out of the emergency room with two broken hearts that day.

We spent 28 very long days in the hospital so our daughter could receive IV medications. After four weeks, we were sent home on oral medication, hoping it would be enough to manage her newfound heart condition. But we would soon find out that her medicine regime wasn’t working.

We came to the hospital not knowing how long our stay would be. We were given an average wait time range but we’ve surpassed it now.

For eight stressful weeks at home, we watched our daughter continue to deteriorate. Then we were admitted back into the PICU, where she was placed on the heart transplant waiting list. We had no other options. Her heart was failing because the oral medications weren’t enough.

I’m writing this in our hospital room, where we’ve been waiting for the last 122 days. We came to the hospital not knowing how long our stay would be. We were given an average wait time range but we’ve surpassed it now. I’d be lying if I said it wasn’t hard living in a hospital. The days are long, boring and I feel like I’m in a horrible version of Groundhog’s Day. Same routine, different day. There’s never a weekend to relax at home to decompress and gear up for another week. It’s living in limbo all day, every day until we get the news.

It almost feels wrong waiting for another young child to pass away so that my daughter can have a second chance at her own life. I already ache and have cried many tears for the unknown family who will unselfishly donate their child’s organs so that my child and others may live. Even though I don’t know who they are, I pray for them as we wait. They’re racing the clock just as much as we are, except they probably don’t realize it. Her heart will likely come from an unexpected death, which just makes it that much harder.

I spend a lot of time processing this experience. It’s been the hardest thing I have ever had to do. I’ve felt a lot of sadness and guilt when it comes to using another child’s heart to replace my daughter’s broken one. But I have to remind myself that my daughter isn’t taking anyone’s life. Her donor’s family will choose organ donation. And because of their loving and thoughtful decision, my daughter will be given the most precious gift anyone could receive. The gift of life. It will be something we will never take for granted and we’ll strive to honor her donor’s life by taking care of her new heart to the best of our ability.

While this process is incredibly draining in almost every way, I try to turn my thoughts away from negativity. It’s so easy to get caught up feeling sorry for yourself. It can and will swallow you whole if you let it. I’ve found that it makes the days more bearable when I count my blessings and have an attitude of gratitude. Even during the darkest days, there’s always something to be thankful for. And finding those things actually brings me happiness and peace despite our circumstances.

Hardships don’t mean we have to be miserable until they’re over. We can and should find joy, no matter how difficult life can be. There will always be things out of our control, but we always have the ability to choose our attitude and reactions. It can often feel like our trial will never end, but I remind myself that it’s just temporary in the grand scheme of things, and I look forward to the day when this is all a distant memory. Until then, I’m choosing joy.