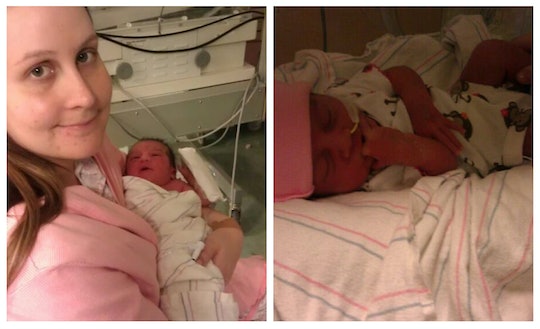 When My Daughter Was In The NICU, I Imagined She Was Home

I heard a distant cry from the other room and rushed to my daughter's bedroom. She wasn't in her crib. Her pink animal bedding was still perfectly arranged. The banner with her name on it was hanging above. Diapers were still neatly packed next to the pink changing pad. I panicked, thinking I was having a terrible nightmare, but it wasn't a dream. I forgot my daughter was still in the neonatal intensive care unit (NICU) at the hospital, without me.

My daughter was born six weeks premature at 4 pounds 12 ounces. Before I went into early labor, I anticipated the moment when my picture-perfect child would be gently placed into my arms. I wondered if we would have that magical instant bond between mother and child.

Instead, I ended up anticipating each second of the day I would get a call from the NICU doctor saying my daughter could come home.

There are not enough books in the world to prepare you for being separated from your child right after birth, no mom's group that can make you feel less alone, no amount of visits from friends and family that can dull the phantom pain you feel when a piece of you is far away in a hospital.

My labor was prolonged in order for my daughter's lungs to develop as much as they could. When I was eventually fully dilated and it came time for me to push, it took me only about three tries.

I did not hold my daughter when she was born. I didn't get to touch her or see what she looked like. I heard a faint cry and she was whisked away to the NICU.

What was to be one of the best days of my life turned into one of the most terrifying.

I was left in the delivery room with thoughts racing through my mind. "Is she alive?" "Will she be okay?" "When will I get to hold her?"

About 24 agonizing hours past before I finally got to have my daughter gently placed in my arms.

I was wheeled into the NICU and there she was, this tiny little being in an incubator with beeping machines and an abundance of thin wires everywhere. She was gently placed into my arms with the NICU nurse trying to make sure no wires would become unplugged. She had an IV in her tiny arm.

It felt like the largest mountain was lifted off my shoulders because my baby was alive and finally with me, her mother.

I had other moments of happiness in the NICU, like when the nurses told me I could bring in clothes for my daughter.

My husband and I still had hurdles to jump over while our daughter grew in the NICU. We went to the NICU to see our daughter every day. I remember the day we first saw her smile. I was softly brushing the side of her cheek and she made the slightest grin. My heart was about to burst. That was the bonding moment I was waiting for.

I had other moments of happiness in the NICU, like when the nurses told me I could bring in clothes for my daughter. She was moved to the other side of the NICU, which meant she was improving. The newborn-sized monkey onesie was too big for her, but she was still precious nevertheless.

My happiness was short-lived. After spending whatever time I could with my daughter, I then had to go home to her empty room.

I had to pump without her near me, which made producing milk near impossible. I watched TV shows and would see mothers holding their newborns and start crying as I continued to pump with barely a drop coming out.

I felt like two different people. In the NICU, I was a stoic mother, smiling without a care in the world as I held my tiny 4-pound daughter in my arms. There, I learned to tune out the beeping sounds from machines.

When I was at home, I was a sleep-deprived woman who was paralyzed with fear that a call from the NICU would be the most devastating news of her life.

I remember going to Target a few days after I gave birth, still with a round belly to remind me of my daughter. A gentleman asked how far along I was and I said I had just given birth. He gave my husband and I an awkward look and I don't blame him. I can only imagine he was asking himself, Where is her baby?

My baby spent 14 long and grueling days in the NICU. Each day I asked her NICU doctors and nurses when she could come home. Each day I had hope that I would hear those magical words, that she was ready to go home. And each day was filled with hopelessness as she had set backs such as not eating enough and had stopped breathing while she slept.

I didn't feel like I was good enough to be her mother because I didn't get to have bonding moments that most parents have. I didn't give my daughter her first bath. Sometimes, I would walk into the NICU and frantically search for her incubator and then feel disappointed that I couldn't spot my own child right away.

I have the utmost gratitude and respect for my daughter's NICU doctors and nurses. They helped keep her alive and saw her flourish. They kept her on a strict schedule that I know I would have struggled with as a first time mom at home.

At times, I wished they could put themselves in my shoes, as a mother away from her newborn; to sense the constant worry and angst I felt every second of the day about how my child was doing. But I understand they must put their feelings aside in order to provide the best care.

I will always remember the day I received the call that my family could finally be together. My husband and I were in our car actually in the hospital parking lot. The doctor said our daughter was cleared to go home.

I cried and was full of excitement, but scared of caring for my daughter without the help of hospital staff. My husband and I got used to her schedule in the NICU and how they bathed her and monitored her feedings.

But we were ready for the challenge because we had been away from our daughter long enough.

And on that perfect day, when I walked alongside the NICU nurse with my daughter dressed in the going home outfit I had bought months ago not knowing it would be too big on her, my fears temporarily vanished. It stood in sharp contrast to the day I was cleared to go home from the hospital without my baby. My husband and I drove home with her car seat empty, our hearts gaping.

When we were home, I placed my daughter in her crib for a moment so I could feel complete and for the first time I did. My daughter was finally where she was meant to be, with me, her mother.