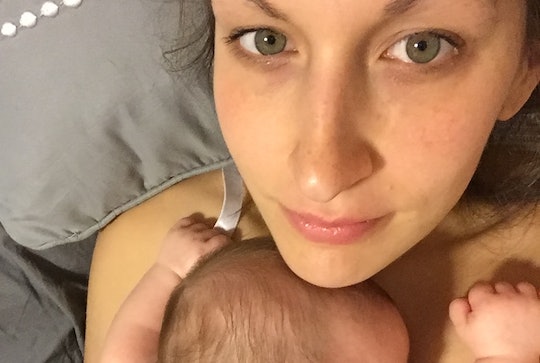 The Road To Night Weaning Is Paved With Sleep Deprivation

I started motherhood with a sleep deficit. I had been awake for nearly 24 hours when my son was born and I don’t think I got any sleep during the two days we spent in the hospital. I had heard that newborns were supposed to be very snoozy, but my son wouldn’t sleep unless he was latched on to my breast or, at the very least, laying on my chest. I could not put him down. That little plastic bassinet they put beside your hospital bed served as a storage bin for our stuff because my baby just wouldn’t let me put him down.

His preference for sleeping on my chest continued long after we brought him home and the only way he would nap was in a sling or in my arms. At night there were three- or four-hour stretches of sleep for the first half of the night and then he would often end up in our bed around 3 or 4 a.m. so I could catch a few extra hours of sleep laying next to him, on my side, my legs wrapped up so my knees would touch his little feet and my arm wrapped around him to pull him close to nurse if he rustled.

I was really intent on breastfeeding for at least a year and had been told at various support groups that night weaning can often cause your supply to tank, so I didn’t even consider it.

At our two-month visit, our pediatrician mentioned sleep-training. He said that my son was growing well and no longer needed to eat at night; that we could night wean and he would learn to sleep through the night.

This sounded insane to me. He was way too small and I knew even if he didn’t NEED the calories at night, he at least needed the comfort. I was really intent on breastfeeding for at least a year and had been told at various support groups that night weaning can often cause your supply to tank, so I didn’t even consider it.

The months of fragmented sleep wore on and I reached a level of exhaustion where the world took on a greyish hue and my emotions were dulled. I had read hundreds of articles about infant sleep and scoured lots of Facebook groups looking for the magic answer, waiting for the night when my son would sleep through the night on his own. It just never came. I started to wonder if the only way my son would start to sleep through the night was if we night weaned.

If I had to place myself in some sort of parenting category, my view tend to be on the crunchier side. I am a fan of gentle parenting and am mindful about considering things from my son’s perspective. “How would I feel if someone did that me…” is a question I ask myself before making most of my parenting decisions and I asked this over and over to myself when I thought about sleep-training and night weaning.

I read the kind of anti-sleep training articles that say crying is the only way a baby can communicate and if you ignore them when they cry, you are essentially saying that you don’t care about their efforts to communicate and they shut down. Any time I got tired enough to consider just shutting the baby monitor off and clocking a solid eight-hour stretch, the words in those articles would haunt me and I would chicken out. I often told myself “if I woke up thirsty or super hungry, I would go in the kitchen and get a drink or a snack — why would I deprive my son of the same, just because he is a baby? So I kept on keeping on. At six months, we did some work to help him fall asleep on his own, thinking maybe this would increase the length of time between wakeups at night or help him sleep through the night. It was nice to be able to actually put him in his crib for naps and do things like shower, eat, et cetera, but it did very little to curb those pesky night time nursing sessions.

If I even dared to try to send my husband in at night to soothe him, my son would scream a scream that sounded as though someone was dipping his toes in a pot of boiling water.

As my son neared his first birthday and was still waking at night to nurse I found myself getting more and more angry about it. I was the only one who could deal with the night wakings, because if I even dared to try to send my husband in at night to soothe him, my son would scream a scream that sounded as though someone was dipping his toes in a pot of boiling water. So I continued to wake up night after night, pick up my crying son, plop myself into the rocking chair, pop a boob in his mouth until he went back to sleep at least two or three times a night depending on the night. I lied to our pediatrician (sorry if you’re reading this, Doctor Dan) when he would ask how my son was sleeping — “Oh yup, he sleeps through the night!”

On one particularly awful night, after being up every two to three hours, my son woke up 45 minutes after I had just got finished nursing him. I looked over at my sleeping husband, got out of bed and kicked the side of my bed as hard as I could. I was so angry and so tired and fantasized about calling an Uber and getting a hotel room so I could just get some goddamn sleep and let my husband and son figure it out on their own. I was moody and irritable and started crying almost every night when I would be awake at 3 a.m. for the third time. I knew something had to change. I was desperate for some actual restorative sleep and was tired of the all night boob buffet, it was time to night wean.

I knew I didn’t want to just stop responding to my son when he woke up at night because I worried that he was waking because he was thirsty or having a bad dream or in pain or some other legitimate reason, but I could not possibly go into his room at night and not nurse him so I had to prep my husband to deal with the night wakings. We decided that when our son woke up, he would go in with a sippy cup of water, offer him some water, and then give him his pacifier and try to soothe him back to sleep by any means possible.

The first night we tried this was... brutal. My son woke up, my husband marched in, and I instantly heard my son begin to wail when he realized it was not me who was picking him up. My skin was crawling and I couldn’t deal with the crying. I knew my son was safe and in the arms of his loving father but I couldn’t help but want to run in and just stop the screaming. It took my husband 45 minutes of holding, pacing and rocking our son before he eventually gave up and went back to sleep. He slept for the rest of the night, an entire six-hour stretch.

After three nights of my husband going in with a sippy cup of water, my son started sleeping through the night.

The next night, we put our son to bed and prepped his sippy cup of water and again when he woke up my husband went in, gave him a sip of water, and performed what my husband had affectionately called the “death march,” holding our crying son and bouncing him gently while walking in circles around the perimeter of the area rug in his room.

After three nights of my husband going in with a sippy cup of water, my son started sleeping through the night. Every so often there would be the occasional wake up due to teething or illness but after we night weaned, it didn’t matter who went in to soothe him anymore — a few minutes of rocking was all he needed to get back to sleep. He no longer screamed as though he was being tortured if his dad went in to soothe him at night; in fact, sometimes when he woke up he would call for “dada” instead of me.

My son is now a little over 2 and we weaned from breastfeeding during the day just shy of his second birthday. I feel like I am just now starting to catch up on the sleep I lost in my son’s first year of life. I finally feel mostly human again and my son sleeps through the night like a champ (except for the occasional wake up here and there). I often wonder why I waited so long to make the decision to night wean.

I look at children whose parents followed our pediatrician’s advice to sleep train and night wean at a few months of age and compare them to my son and it’s not like I can notice any tangible differences. Is my son really that much better off because I nursed him at night until he was a year old or was I doing it because a few articles I read guilted me into thinking if I wanted to be a good mom I had to put my son’s needs ahead of my own, despite what it meant for my own quality of life?

A child needs their mom to be happy and fully functioning — to be able to see colors and feel feelings — and that requires adequate sleep, even if that means night weaning before some online mom agrees that you should.

More Like This
12 Helpful Tips For Hiking With Kids
10 Ways Breastfeeding Is Good For Moms, Too
How To Tell If Your Newborn Is Nursing For Comfort
Why Does My Baby Cough While Breastfeeding? Experts Explain