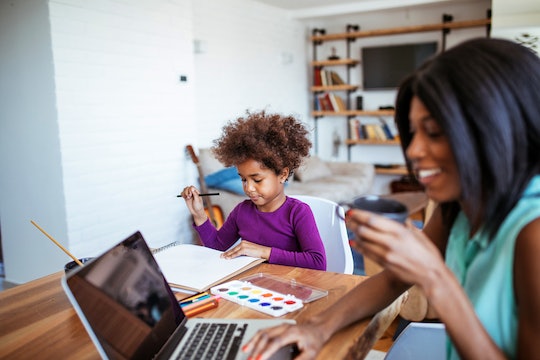 Study: When Parents Feel In Control At Work, It's Better For Their Kids' Health

It's not exactly breaking news that parents' work lives suffer when their kids are out sick, but it looks like the converse is true as well. When parents feel in control of their work lives, it's better for their children's health, according to a recent study. The connection between work and home life is closer than you may realize, and efforts to strike a balance benefit children.

Researchers behind the study, which was published in the Journal of Occupational Health Psychology, looked at how parental work autonomy impacted child health. Collecting data from families in Lagos, Nigeria in both high and low income areas, the team surveyed teenagers in school about their health, according to Science Daily. Economic status had less of an impact on children than one might expect; instead, the amount of control that their parents had — or felt they had — at work seemed to influence child health.

The team found that when parents don't feel in control at work, they are more likely to bring their work stress home with them, as Yahoo! reported. And when children are exposed to this stress, their health suffers. Study co-author Christiane Spitzmueller, professor of industrial organizational psychology at the University of Houston explained in a statement, "If you can decide how you are going to do your job, rather than having that imposed on you, it is better for children," according to Medical Xpress.

In order to determine parental self-control, Spitzmueller and the other authors of the study looked at what they described as "self-regulatory resources," or their ability to control reactions to their children, Science Daily reported. "If a parent has too many stressors, it reduces your self-control," Spitzmueller said. And when parents aren't in control, their children's health is negatively impacted, as the study explained:

At lower levels of job autonomy, employees likely have to rely more on self-regulatory resources to compensate for the impact of limited control over one's job on one's personal life. At higher levels of job autonomy, freedom and more decision-making opportunities are likely to motivate the person to engage; however, self-regulatory resources would be less needed.

This isn't the first study to suggest that parents' life at work impacts their family. A study published in June found that parents' work schedule also has an impact on their children, according to the Economic Times. When parents work irregular schedules, their kids are more likely to struggle with behavior issues.

Here, too, control or lack thereof was a central theme, as this study's lead author Christine Leibbrand told the Economic Times: "Workers often struggle to carve out the work/life balance they want for themselves, and in dual-earner families, balancing partners' schedules remains an issue for many families. Parents are facing these decisions of balancing work and caring for their children."

Given her team's findings, Spitzmueller called on employers to promote job autonomy. "Managers and supervisors can be trained to more effectively deal with their employees and to encourage a greater sense of autonomy," she said, according to Science Daily. Even small steps, such as teaching parents to take a moment to decompress before interacting with their children after work, can help lessen the negative impacts of work stress on children.

Life simply doesn't fit into neat little boxes of "work" and "home." The spheres bleed into one another and work stress follows you home, just like concerns from home are with you while you work. Studies such as Spitzmueller's and those that came before help to explain this connection and show parents how to strike a balance that benefits everyone.