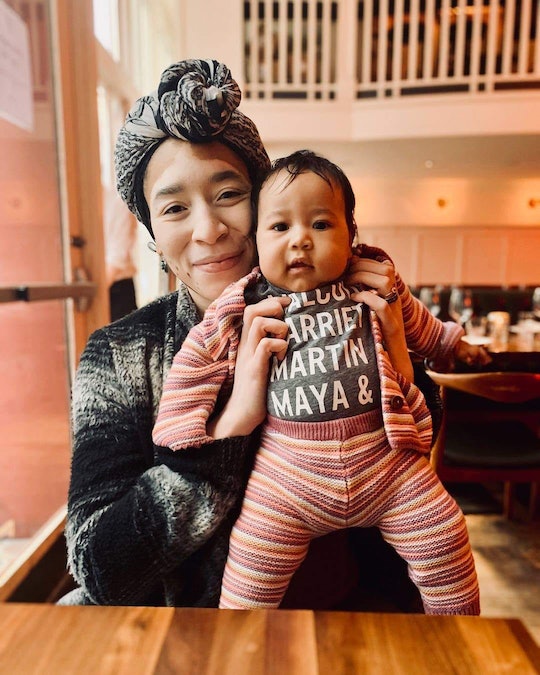 What I Really Think When People Ask, "Is That Baby Yours?

I'm a Black mom with vitiligo, a skin disorder that results in depigmentation, raising an Afro-Latinx child, so I can safely, and sadly, say that I've had people ask me, "Is that baby yours?" more times than is acceptable. (Hint: the "acceptable" amount of times to ask anyone this question is precisely zero.) The number of times I've had to say, "I'm the mom," or, when standing next to my partner as he holds our child, "We're together," is annoying and frustrating and exhausting.

If we were all the same skin color, or had the same hair type, I highly doubt I'd be fielding the same type of questions.

Unfortunately, a large number of strangers asking me questions as if I somehow do not belong is nothing new. Growing up, I was a dark-skinned Black girl who lived with my light-skinned mom and her light-haired, blue-eyed husband. Shortly after they got married, my sister was born: a blond-haired, green-eyed, fair-skinned girl. I didn’t resemble my family members and there were countless moments during family outings in which people would ask me if I needed help, if I belonged with the people I was with, or if I was simply lost.

As a kid those moments felt strange and frustrating. I’d wonder why they were asking me those questions and eventually it made me question myself, my identity, and whether or not I did actually belong.

Decades later, when I worked as a nanny in Brooklyn, I’d watch parents, babysitters, and other nannies talk to each other on playgrounds, at the park, or at local events, and I’d hear questions and comments I heard as a kid. This time, though, they were directed at caregivers.

“Awww is this your baby?”

Or the ever-popular, smiling stare into the stroller followed by a simple, “Yours?”

I would only ever hear people ask those questions if the baby and their caregiver had different skin colors. It was most common to hear that question if the caregiver was Black, or a woman of color, and the baby was white or had a very light complexion.

In some cases, like if a child appears to be in danger, it makes sense to ask those types of questions to ensure that a child is safe and with a caregiver who can adequately care for them. But the more I'm asked this question the more I struggle to approach it from a place of understanding. Instead, I grow angry because, honestly, what does it matter?

And then I'm transported back to my childhood, when white people would tell me they were surprised by how “well-spoken” I was, or were so taken back by the fact that I loved to read.

Why do you, stranger, want to know? What is it about my family that makes us appear to be less of a family than, say, whatever version of a family you think we're supposed to look like? And if you are truly fearing for my baby's safety, what it is about me that makes me appear to be an inadequate, potentially dangerous caregiver?

A little over 10% of married couples in the United States are interracial or interethnic, according to the U.S. Census Bureau. An estimated 135,000 children are adopted in the U.S. each year, as reported by the Adoption Network. Upwards of 3.7 million U.S. children have an LGBTQ parent, according to the Family Equality Council. It should go without saying — but, apparently, it must be said — that families aren’t defined by how they look. Yet families who don't fit a certain stereotype are often questioned, and, as Dr. Elizabeth Hordge-Freeman, PhD, professor and sociologist, wrote in her award-winning book The Color of Love: Racial Features, Stigma, and Socialization in Black Brazilian Families, "racialized features are a point of comparison for parents." When step-parents and step-children, multiracial families, adoptive families, foster families, and other types of families made up of people who may not physically resemble each other are forced to explain themselves, racial hierarchies and racial stigma are legitimized.

When someone asked me if my baby is mine, I see their inquiry for what it truly is: another microaggression that Black people and people of color experience on a daily basis. Whether someone has the best of intentions or not, when they ask this question they're creating a moment in which I am forced to be reminded of how my Blackness is viewed by others, how it informs their assumptions of me and my family, and how their singular view of a family does not include me and mine.

And then I'm transported back to my childhood, when white people would tell me they were surprised by how “well-spoken” I was, or were so taken back by the fact that I loved to read.

So, before you ask someone if a baby is theirs, ask yourself why you feel the need to ask them that question in the first place. If you're at the park or the grocery store or anywhere and you get the urge to ask someone holding a baby if they're the nanny, the babysitter, or the mother, ask yourself how their answer will impact you. Ask yourself why it matters. Find out what's driving your curiosity. Because my family doesn't exist to simply enlighten you on the vast array of family makeups. We're just a family, trying to enjoy our day, just like any other family you will inevitably encounter.

And I'm just a mom, trying to enjoy motherhood without the judgmental comments of others.