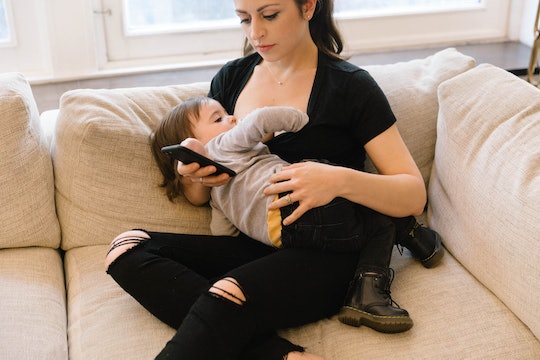 A few weeks ago, I was at a cousin's bridal shower with my 2-month-old son in tow. I had dressed him to look extra cute and was proudly showing him off to all the attendees when I overheard a group of elderly women expressing their disapproval over the fact that my baby wasn't wearing any shoes. His little feet were covered in warm socks, but that was apparently insufficient, despite the fact he won't be walking for practically a year. I felt pretty defensive, but inside I began to second guess myself: When should a baby start wearing hard-soled shoes?

It turns out, my original instinct was just fine. Medical advice on the subject today is quite different than it was a generation or two ago, when no family picture was complete without a bouncing baby in high-top booties. As cute as novelty shoes can be on even the littlest babe, many experts now believe that the malleable bones of infants' feet need room to form and grow on their own, without the restriction of hard shoes.

Yee Wong, creator of SoftBaby organic baby clothing, says she advises clients not to rush the developmental process, but to wait until they have a skilled and confident walker on their hands before putting their baby in hard-soled shoes; which typically means waiting until she is at least 15 months of age or older. "You want the baby to be fully comfortable walking barefoot first," Wong tells Romper.

"If necessary, hard-soled shoes can harmlessly be put on baby's feet for a limited amount of time," Wong continues. "For example, when the baby is walking in areas that require protection for her tender feet, like when she is playing outside in the gravel or mulch at the park.”

You might be balking at this point. Don't hard-soled shoes provide valuable support for your baby's developing hooves? Haven't you heard that from a hundred places? Maybe so, but there is apparently a lot of misinformation out there. Supporting Wong's admonition to choose bare feet as often as possible, a podiatrist told the Chicago Tribune that once your baby starts walking, there's nothing better for her feet than full range of motion, because flexibility is paramount to developing a healthy arch. In situations where it is either not socially appropriate or unsafe to do so, choosing the shoe with the most "give" is the next best thing.

But what if your baby is like mine and is months away from even attempting his first steps? If it makes you happy and your child doesn't mind, putting shoes on your pre-walker won't hurt anything — assuming the shoes are the right size — and may even help keep renegade socks in place. As long as her feet are dangling in the shoes rather than balancing on or bearing weight in them, shoes on infants are a harmless fashion statement. But keep in mind that they're also not beneficial either.

Personally I'll continue to forgo putting shoes on my baby until it's absolutely necessary, because as a mother of four, I try to avoid making any extra work for myself. But when the time does come that he begins walking, I'll take the experts' advice and believe that his bones can do their thing best if I give them room to grow and only put hard soles on him if it will keep him safe outdoors. And if his bare or socked feet elicit disapproving whispers from others, well, at least I know I have science on my side.

More Like This
The Baby Formula Shortage Is Impacting Real Families & Hospitals
Can You Help Your Baby’s Hair Grow?
Here’s What You Need To Know About That Viral 1960s Baby Formula “Recipe”
These 4 Sleeping Positions Will Keep You Comfortable After A C-Section