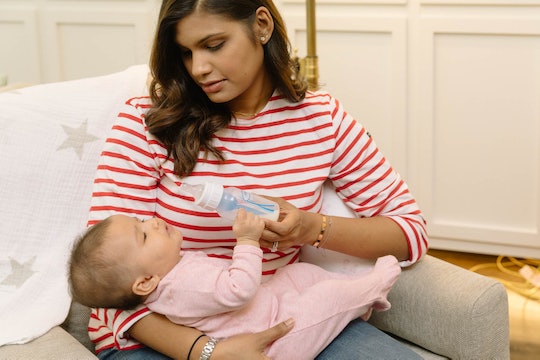 Here's When Your Baby Should Really Be Giving Up That Bottle

Most of us know that babies need to be getting either breast milk or formula, or a combination of both, through their first 12 months of life. Proper nutrition is essential for their growing bodies and brains, yet their teeth and digestive system are not ready to take on the task of meeting their nutritional needs through solids alone. But when does the necessity of bottles begin to change? Quitting too soon might mean depriving Junior of valuable nutrition, but letting it go on too long has risks as well. So when should a baby stop using a bottle? Expert opinion on this issue is surprisingly consistent.

Emily Silver, a Family Nurse Practitioner, lactation consultant, and co-owner of Boston NAPS, points out the American Academy of Pediatrics recommends beginning the bottle weaning process at 12 months and finishing by at least 18 months. "I find that most pediatricians in Boston have families stop using bottles at the one-year visit," Silver tells Romper. "Typically they recommend introducing a sippy cup around 6 to 9 months, filled with breast milk, formula, or water, to get the baby used to this type of cup."

California-based pediatrician Dr. Gina Posner agrees that after about the sixth month, gradually introducing sippy cups is a good idea. The more comfortable a baby is with a cup at the age of 1, Posner says, the easier the weaning process will likely be.

While Posner does not recommend introducing a cup in the first half of a baby's first year of life, she says any time after that is fair game. Like Silver, the pediatrician agrees that you want the bottles gone by 18 months.

Just how difficult is the bottle weaning process? It really depends on the child. "Some kids are very attached to their bottles and fight for it. Others are fine giving it up," Posner says. To make the process as smooth as possible, start off by using sippy cups that are similar in style to bottles. Some tots prefer the kind with straws, while others can't get the hang of them. Try out different varieties and see what your baby likes best.

While some families do have success taking the bottle away "cold turkey" at age 1, you might have an easier transition if you make it gradual. Silver advises, "Decrease the number of bottles you offer in a day and start replacing those times with a cup of milk or a snack. I would recommend getting rid of the least important bottles first, which are usually the ones during the day. Toddlers tend to like their bottle first thing in the morning and before bed. You can eventually drop the morning or night bottle, then vice versa for the final bottle."

Professionals agree that bottle feeding past the age of 18 months can have harmful health effects. "Prolonged use, especially nighttime use, of bottles with anything other than water can increase cavity risk," explains Dr. Erin Issac, a pediatric dentist in Pittsburgh. "Kids who are put to bed with a bottle of milk or juice typically end up with severe early childhood caries. For little ones who can't sit still, that often means having invasive procedures done under general anesthesia."

But the risks don't end there. "Prolonged bottle use can also cause orthodontic issues in both baby and permanent teeth. The tongue is an extremely strong muscle and it can cause the moldable bones of the palate to take the shape of the bottle nipple, causing crowding of teeth and even changing the shape of the upper jaw and palate."

So if your little guy is 1 and still using a bottle, it's time to make a plan for weaning, whether that be gradual or cold turkey. If you're dreading the fall out, just remember: Dealing with tantrums is a lot easier than paying for dental work.