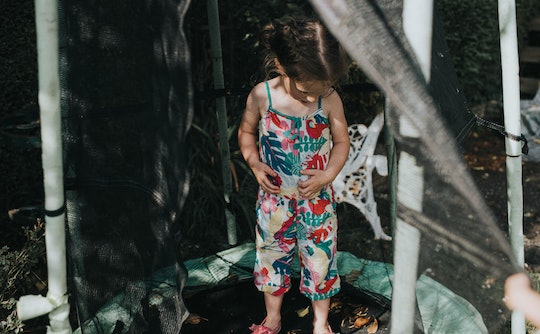 Here's When You Should Be Concerned About Your Child's Tantrums, According To Experts

We all know that children are going to break down at some point. Their tantrums can be mighty, and unexpected. But when is it too much or too often? When should you be concerned about your child's tantrums?

For the most part, tantrums are just a part of growing up, which is why Jennifer Katzenstein, Ph.D., director of psychology and neuropsychology at Johns Hopkins All Children’s Hospital wrote in an article on the hospital's website that when you're dealing with a temper tantrum, the best course of action is to stay calm and actively ignore the behavior. But for some children, tantrums become an overwhelming problem that simply can't be ignored because it's cutting into your day or wiping them out.

Because here's the thing about tantrums: they're normal until they're not, says Nicole M. Avena, assistant professor of neuroscience at Mount Sinai School of Medicine. She tells Romper that it is important to keep in mind that "there is a wide range of behaviors in children that are part of the normal emotional development process. There are age-appropriate tantrums, but as children get older, their tantrums should be fewer and less intense." If the tantrums get violent or if the tantrums seem to last longer or don't shorten in length over time, there might be concern. She also adds that when kids are ages 3 or 4, they do tend to hit and kick, but with guidance they stop. Violent tantrums that cannot be quelled are what is worrisome.

Robert Hamilton, pediatrician at Providence Saint John’s Health Center, agrees that most tantrums are expected — and annoying — and are best ignored entirely. (And oh how pissed off your toddler gets at first when they realize you're not paying any attention.) However, he tells Romper that by the time a child is 3 to 4 years old, tantrums should become less common. "Children who continue to have significant and frequent tantrums at this point should be brought to a pediatrician.” Again, it might still be nothing. My daughter is neurotypical and at age 9, she can still throw an unholy fit complete with a scream that will pierce your ears. We've learned she's just dramatic. My son, on the other hand, is autistic, and his tantrums used to take him out. He would get so mad for so long, that he would throw up or hurt himself. That was not normal, and it was one of our first clues that he might be struggling.

If you feel like your toddler's tantrums are affecting their daily life (and yours), it might be worth speaking to your healthcare provider. Chances are, it's nothing, but if a child over the age of 4 is violent and can't be redirected from their tantrum, or if the tantrums become longer and lengthier, it might be time to speak out.

Nicole M. Avena, PhD, assistant professor of neuroscience at Mount Sinai School of Medicine and author of What to Feed Your Baby and Toddler

More Like This
Winter Travel Tips For Families
Tips to Beat Jet Lag, For You & Your Kids
The Best Travel Tips For Solo Parenting
A Parent’s Guide To Stomach Pain In Kids
What Parents Are Talking About — Delivered Straight To Your Inbox