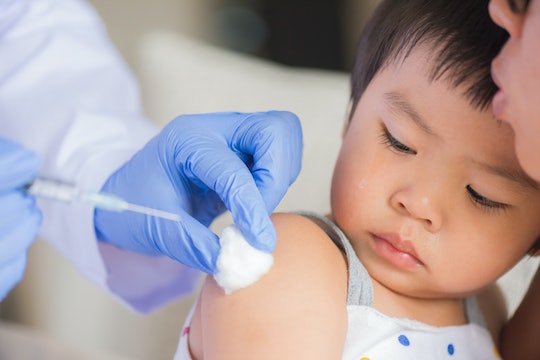 With Flu Season Is Around The Corner, Here's The Best Time To Get Vaccinated

As September draws to a close and the temperature begins to dip, warm summer afternoons are replaced with chilly autumn days, heralding the beginning of a new season. But I'm not talking about fall, I'm talking about the dreaded flu season. Fever, chills, fatigue, sore throat, body aches, and a runny nose — there's absolutely nothing enjoyable about getting the flu. But when should you get a flu shot? Health experts have said it's best to begin the season vaccinated.

While most people who contract influenza, or the flu, recover without complication, the U.S. Centers for Disease Control and Prevention (CDC) warns that it can cause serious illness, resulting in hospitalization and even death. Even if you don't end up hospitalized, the flu often results in at least a few missed days at work or school. That's why the CDC has recommended that anyone 6 months or older (with rare exceptions) get vaccinated by the end of October.

"Balancing considerations regarding the unpredictability of timing of onset of the influenza season and concerns that vaccine-induced immunity might wane over the course of a season, it is recommended that vaccination should be offered by the end of October," recommendations from the CDC's advisory committee on immunization practices for the 2019-2020 flu season stated. "Children aged 6 months through 8 years who require two doses (see Children Aged 6 Months Through 8 Years) should receive their first dose as soon as possible after the vaccine becomes available to allow the second dose (which must be administered ≥4 weeks later) to be received by the end of October."

Ultimately, the goal is for you and your family to receive the flu shot before the influenza virus becomes active in your community. But while young children may need to get their first dose of the influenza vaccine weeks before the season is estimated to start, the CDC warns that adults and children who require only one dose should refrain from getting it too far in advance. "Early vaccination (i.e., in July and August) is likely to be associated with suboptimal immunity before the end of the influenza season, particularly among older adults," the CDC's recommendations noted. Additionally, individuals who have already received the flu shot this season are not recommended to get an additional shot or revaccination later in the season.

Of course, not everyone gets the flu during flu season. In fact, the CDC has reported that only approximately 8 percent of the United States' population gets sick each season. Still, vaccination is particularly important for those the CDC states are at a higher risk of developing dangerous flu complications such as pneumonia, bronchitis, sinus or ear infections. These include children younger than 5 years old, adults age 65 or older, pregnant women, women who recently (within two weeks) gave birth, people with weakened immune systems due to disease or medication, and people with asthma, heart disease, blood, endocrine, metabolic, kidney, or liver disorders, to name only a few.

But, as with any vaccine, it's important to talk with a medical professional about which flu vaccine is right for you. The recombinant quadrivalent flu shot, for example is not approved for use in anyone younger than 18, while the quadrivalent live attenuated influenza nasal spray vaccine is not recommended for pregnant people, according to the CDC.

Although health experts can never predict exactly when flu season will start, it generally peaks sometime between December and February, according to USA Today. But in following the CDC's recommendation and getting the vaccine before Halloween, you'll have a better chance of not contracting the virus when it hits your local community.

More Like This
You Can Schedule Your Kid’s Covid Vaccine Appointment At Walmart
Elmo Talks About Getting His Covid Vaccine In A Cute New Video
The Covid Vaccine For Kids Under 5 Has Been Sent To The FDA For Review
I'll Be First In Line To Vaccinate My Kids, But I'll Never Forget That We Were Last