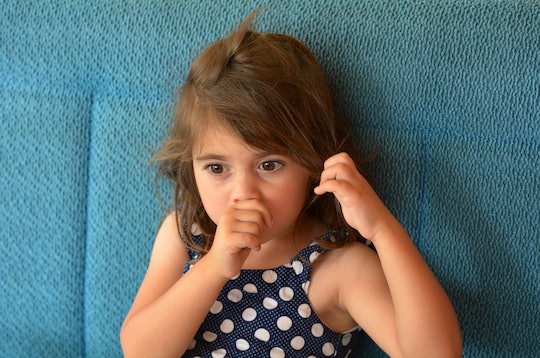 Here's When Your Kid Actually Needs To Stop Sucking Their Thumb

As anyone who's ever seen a baby sucking her thumb on an ultrasound knows, this instinctive method of self-soothing is one that plenty of kids start before they're even born. Not all babies suck their thumbs, of course, but those who do are oftentimes pretty attached to the habit (hence the word "habit"). Unfortunately, while thumb-sucking is totally natural and maybe even necessary — considering the legitimate physical need babies have to suck — this seemingly harmless practice does need to come to an end eventually. So when do kids need to stop sucking their thumbs?

This might sound crazy to someone who's trying everything to get their kid to ditch the thumb-sucking habit, but I used to get really jealous of parents with babies who sucked their thumbs when my kids were younger. As an exhausted mom who got stuck in the problematic habit of nursing my babies whenever they woke up or got upset, it seemed I could get a break from playing pacifier if only my babies would suck their thumbs. Alas, you can't force babies to start sucking their thumbs any more than you can force toddlers to stop sucking their thumbs so, at the very least, I didn't have to go through the process of convincing any of my kids to stop indulging in this reflex. But what if I had been forced to deal with this issue, which you might be facing right now?

There's no official age when kids need to put their thumb-sucking days permanently behind them. In fact, doctors usually tell parents not to be too concerned about thumb-sucking during the first few years of life, Stan Spinner, M.D., the chief medical officer at Texas Children's Pediatrics in Houston, told Parents — assuming they're developing language skills normally and on schedule.

Kids usually give up sucking on their thumb around age 5 or 6, Dr. Spinner explained, which is just in time (from a dental perspective).

"As long as your child still doesn't have the habit by the time her permanent teeth grow in, which is right around that age, there's little reason to worry the thumb-sucking will damage her teeth," Dr. Spinner said.

If she does still have the habit, it's true that the most worrisome repercussions of extended thumb-sucking are mostly dental in nature. As board-certified family physician Dr. Mia Finkelston told PopSugar, thumb sucking "interferes with the normal development of teeth" and can cause permanent changes in jaw shape; it can also negatively affect speech.

This usually doesn't happen, according to Dr. Finkelston, because "in most cases, [thumb sucking] disappears as the child becomes more self-sufficient and social once they reach 2 years old." (The majority of experts seem to say age 4 or 5.) Parents should only be concerned if the habit "interferes with the child's functioning, whether it's physically, emotionally, or socially," said Dr. Finkelston.

More often than not, even kids who suck their thumbs past toddlerhood will give it up when they start school in a bid to fit in with all the non-thumb-sucking kids. That's a good thing, because as London-based dentist Dr. Ron Baise told Romper for a previous article, there are "other risks associated with an overbite produced by extended thumb sucking" beyond the structural issues already mentioned that most parents don't know about. These include chipped teeth, speech impediments, and low self-esteem (yikes!). Plus, "children may develop a preference for mouth breathing that dries the mouth out and leads to stained teeth, gum disease, and cavities," and has even been linked to sleep apnea later in life.

Still, there's no need to panic even if you've got a devoted thumb-sucker on your hands who shows no signs of quitting, ever. Remember, nobody graduates high school (or even 5th grade) with a thumb in their mouth. So don't make a huge deal about it, as that approach is sure to devolve into a fruitless battle of wills.

"Instead of paying attention to or correcting the thumb-sucking, or even punishing them for it, give attention to the more positive aspects of the child's behavior," said Dr. Finkelston "This will build self-confidence as well as provide the healthy attention and nurturance the child craves as they develop. A child that actively tries to restrain his or her thumb-sucking habit should be given more praise and encouragement."

Hey, don't we all need a little encouragement when we're trying to kick a "bad" habit?