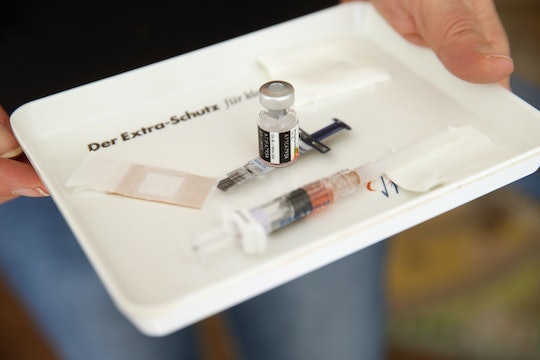 When Parents Should Get The Tetanus Vaccination

With so much unnecessary debate going on about childhood vaccines lately, some people have forgotten that adults need them, too. The Centers For Disease Control have recently released new guidelines in order to clear up the confusion, so parents know when to get vaccinated for tetanus, influenza, and other preventable diseases. Part of protecting your kids means protecting yourself, because they rely on you to be healthy. And the best part is that since you're a grown-up, you can have as many lollipops as you like once you get your shot.

First, to get this out of the way, vaccines are safe, effective, and necessary for both children and adults. It is not a matter of opinion, it's a matter of science. Vaccines do not cause autism, and they never have. The idea that they do was perpetrated by a former doctor stripped of his medical license for fraudulently claiming a link in order to profit from the hysteria that followed. For further evidence, please read any website without the word "natural" in the title, or better yet, talk to somebody who does have a medical license (other than Jill Stein, of course). Now that we've gotten that out of the way, let's talk about when you need a booster.

Tetanus is a bacteria found in soil, and can get into the body through a cut, including an animal bite. It can cause muscle stiffness, lockjaw, and even death. Adults should receive the Td vaccine (which protects against both tetanus and diphtheria) every 10 years, and should also receive one Tdap vaccine (which protects against tetanus, diphtheria, and pertussis, also known as whooping cough) in place of one of them. That's assuming they were vaccinated normally as a child; if you've never received a tetanus vaccine, according to the Mayo Clinic, you'll need a three-shot series before assuming the 10-year schedule. If you have received the vaccine, but you're not sure how long ago, it's usually safer to get it early than late.

Adults should also receive an annual flu shot (the shot is more effective than the nasal mist), and one or two measles, mumps, and rubella shots (depending on work, travel, and medical conditions). If you escaped childhood without catching chicken pox, there's a vaccine for that now (two shots), but if you did have it, you'll need a herpes zoster shot to prevent shingles once you turn 60. If you're under 26, you also need three doses of the HPV vaccine, and those over 65 need a pneumococcal vaccination. Adults also need two shots for hepatitis A, three for hepatitis B, and depending on your medical conditions, you may also need a meningococcal vaccine and a Haemophilus influenzae type B vaccine, also know as Hib. That's a lot of shots — But like I said, unlimited lollipops. Now, go call the doctor.