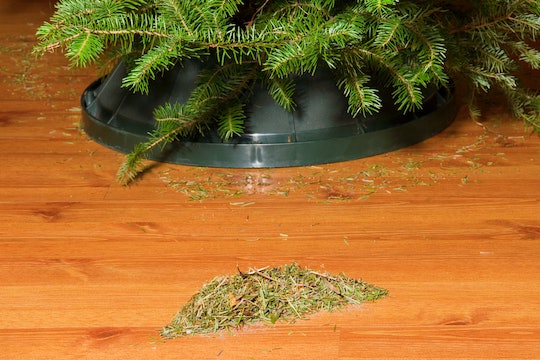 After all the time you spent hunting for the perfect Christmas tree, untangling lights and hanging ornaments in such a way that's both symmetrical and not too much of a temptation to your mischievous toddler and/or curious cat, you're probably not in too much of a rush to strip the thing down and toss it away when the holiday is over. Alas, no evergreen stays green forever (not once it's been chopped down and put in a stand, anyway). So when should you throw away your Christmas tree?

You might think there are no hard and fast rules when it comes to ditching your decorative centerpiece, but there are in fact certain guidelines that we're meant to follow — both traditionally and (perhaps more importantly) from a safety standpoint. Let's start with the traditional stuff. If you thought The Twelve Days of Christmas was just a song about a whole lot of different types of birds (hens, doves, swans, a partridge...what's the deal??), you might be surprised to hear that there's a little more to it, involving a customary farewell to your fir.

See, the twelve days of Christmas are actually a thing, culminating with "Twelfth Night" (yup, like the Shakespeare play), which is a festival marking the end of Christmas and the coming of The Epiphany, a Christian feast day celebrating the visitation of the Three Wise Men, according to The Sun. This day, which falls on January 6, was traditionally when people took down their decorations (partly because it meant Christmas was over, and partly because people used to believe that tree spirits lived in the greenery adorning their households — and who wants tree spirits overstaying their welcome?).

But let's assume you're neither worried about tree spirits nor concerned about purging your home of all things holiday-related just a few days after the new year. How long is it acceptable to keep your tree up in that case? Because, let's face it: Taking that thing down is nowhere near as fun as putting it up, and no one enjoys the Sisyphean task of ridding your home of errant pine needles. It's all too easy to let your tree slowly become a permanent addition to your home, as anyone who's ever considered the possibility of turning a dried-up tree into a "Valentine's Day Shrub" knows. Unfortunately, holding on to a tree past its expiration date can have very dangerous consequences.

While Christmas tree fires aren't all that common (according to the National Fire Prevention Association), they can be serious: One out of every 32 reported Christmas tree fires results in death! And the longer you keep your tree up, the more dried out and hazardous it gets, which is why the NFPA advises removing your tree once needles start dropping and it loses its signature seasonal scent.

If you water your tree daily, it should stay fresh (and safe) for about three weeks. Still, be sure to keep it at least three feet away from heat sources including radiators, heating vents and (of course) fireplaces, and never use light strings with loose bulbs or frayed/exposed wires. Also remember to turn the tree off every night before you go to bed, even on Christmas Eve (Santa won't mind, don't worry), and — while this should go without saying — never decorate your tree with lit candles. Can you believe that was ever a thing?

As sad as it can be to say goodbye to your tree, there's really nothing very festive about a prickly old thing that's constantly dropping dried-up needles all over the floor anyway. Plus, while many towns and cities have tree recycling programs, there's generally a cut-off date — and if you wait too long, you risk missing the deadline and having to figure out how to dispose of it yourself. If all of this sounds like way too much work, well, you could always get a fake tree next year, right? Nah