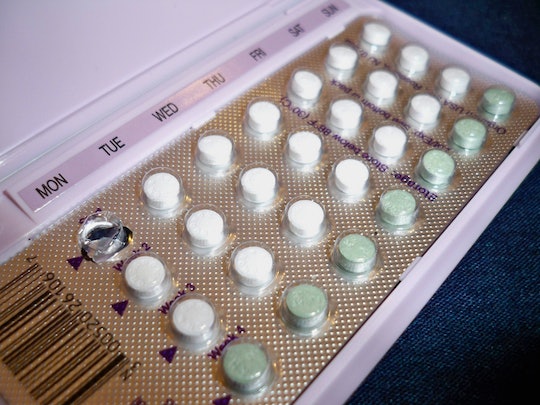 When Should You Go Back On Birth Control After Having A Kid?

When you’re dealing with the whirlwind of a newborn and your life is a series of feedings, diapers, and naps, the thought of another pregnancy may be the last thing on your mind. And how could you be expected to remember to take the pill every day when you don’t even have time to brush your teeth on a reliable basis? But it does make sense to think about when you should go back on birth control after having a kid, because this would likely not be a good time for any surprise pregnancies.

Because you didn’t have to worry about taking birth control while pregnant, it’s been months since you last had to deal with any contraceptives. Furthermore, if you’re breastfeeding continuously (at least “every four hours during the day and every six hours at night"), then this can act as a type of natural birth control for up to six months, as explained by Planned Parenthood. But if you'd feel safer with a backup method, or if you won’t be breastfeeding continuously, then it's a good idea to consider other methods of birth control. Even if you've only taken the pill before, it might be a good time to learn about what other options are available during the postpartum period. Here is a roundup of the general timelines for everything from POPs to the shot to the implant, so you can find a method and timeline that works for you and your family.

Even it you're breastfeeding, you can follow the Mayo Clinic's advice and opt for oral contraceptive progestin only pills (AKA "POPs"), which do not affect your milk supply, as estrogen pills may. POPs can be taken about six weeks after giving birth, and women who do not consistently breastfeed can start them at three weeks postpartum, as a piece in the Global Library of Women's Medicine noted.

However, other methods such as the combined pill, vaginal ring, or contraceptive patch may affect your milk supply, as the National Health Services explains, so you may want to wait until your baby is about six months old and weaned before using those methods. Women who aren't breastfeeding can discuss their options with their physician.

If you aren't breastfeeding, or just want a backup method of birth control during this time, then you have a few options. As the Mayo Clinic reports, barrier methods such as condoms or diaphragms are a good choice, and they can be used as soon as you're ready for sex again. But as Bedsider explains, it may be a good idea to wait six weeks to let things heal before using a diaphragm or cervical cap.

As the American College of Obstetricians and Gynecologists (ACOG) explains, you can get an implant immediately after you have your baby. It can often be inserted into your arm before you even leave the hospital, and the progestin implant is safe for nursing moms. It can be effective for up to three years.

Another immediate option, the IUD can be placed as soon as you've delivered the placenta, according to the Reproductive Health Library. Depending on the type, it can provide effective contraception for three to twelve years, and it is safe to use while breastfeeding. Long-term contraception that you don't have to worry about is an attractive option for many new moms.

The birth control shot is another immediate option for postpartum contraception. The University of Pittsburgh Medical Center notes that it's also safe for use while breastfeeding, and one shot before you leave the hospital will be effective for three months. And after giving birth, you won't even notice a needle.