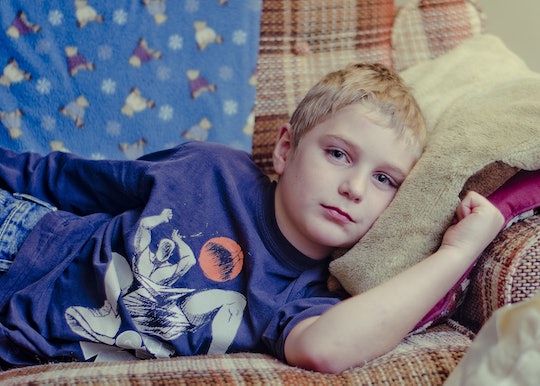 When Should You Keep Your Kid Home From School?

It's the middle of winter, which for many parents means one thing: cold and flu season. Getting sick is a normal part of childhood, and when it means staying home from school to chill out on the couch, kids aren't always totally bummed out. But when should you keep your kid home from school? Parents and schools are at odds about what constitutes a sick day.

Once a kid starts school, they get exposed to all kinds of germs that can give them the full range of childhood illnesses: colds, the flu, stomach bugs, sore throats, you name it. Most of these run-of-the-mill ailments aren't serious, and a kid might miss a day or two of school, but then they'll be back on their feet. Sometimes, though, these seemingly non-serious illnesses can become serious if complications develop. While a flu might not be serious for your child, a kid in their class could wind up in the hospital if they get sick.

The logic behind keeping your kid home sick from school isn't just about letting them recover: it's also about preventing the illness from spreading throughout their classroom, particularly to other kids who might have compromised immune systems. The general rule is, if your kid is contagious, they should stay home. But how do you know if your kid is contagious, and how long will they stay that way?

A poll from the University of Michigan found that 75 percent of parents surveyed reported at least one sick day for their child in the past year. When asked about why they let their child stay home from school, the parents said they were worried the illness would get worse, and concerned that their kid would infect their classmates. Symptoms made a big difference, too: parents were less likely to send their kid to school with diarrhea or vomiting than they were with a runny nose, cough, or even a slight fever.

That last symptom can be confusing, though: a fever means your child's body is trying to fight off an infection, and there's a good chance they're contagious if they're feverish. But a mild temperature might not be that big of a deal. Generally, if your kid is running a temp over 100 degrees Fahrenheit, it's best to keep them home.

Other symptoms, like those of a cold or "stomach bug", can be a little trickier. If your kid has a runny nose, but is also running around, playing, and generally feeling pretty good, they're probably good to go to school. If they're super run down and have a bad cough, not only are they unlikely to be able to pay attention in class, they're probably going to spread their germs and distract their classmates, too.

If your child has only thrown up once in the last 24 hours, and doesn't have diarrhea, it's probably safe to send them to school. Kids throw up for all kinds of reasons, and most of them aren't serious. But, if your child has thrown up more than twice in 24 hours, has diarrhea, and isn't feeling well enough to replenish fluids, keep them home. In fact, some "stomach bugs", especially the ones caused by Norovirus, are highly contagious even after symptoms have stopped. You might not want to send your kid back to school right after their symptoms go away, especially if they're still a little dehydrated. But, of course, all of the above information should be double checked with your family physician.

Some parents say that the decision to keep a kid home from school isn't as simple as illness – their kid might well be punished for missing school. Older children especially might be reluctant to skip school for a day in bed if they have a test, or are afraid of homework piling up. Some schools punish kids who miss more than a few days each quarter. Kids who have conditions like asthma — that can turn a cold into a hospital visit — are particularly harmed by these policies.

For those kids who have compromised immune systems, sick classmates can be a recipe for disaster. One mom shared the story of her 3-year-old daughter on Imgur, making a plea to parents to keep their kids home when they're sick. Laura Correada-Silva let her daughter, Chloe, play with her cousin, who had an upper respiratory infection. "My brother presented her like, ‘Oh she has a lung infection but she shouldn’t be contagious.'" Correada-Silva said in her post, which has since been removed from Imgur.

Chloe, who has asthma, landed in the pediatric ICU after contracting the bug from her cousin, which developed into a serious infection known as respiratory syncytial virus (RSV). According to the CDC, RSV is fairly common (it's what usually causes bronchitis) but can have serious complications for certain people, such as kids like Chloe who have respiratory conditions. Chloe's mom reported to POPSUGAR that she's on the mend, but the scary situation made her put out a call to parents to think before sending their kids to school if they're sick, or letting them keep play dates: "Please. If your child has a cold, or a flu, or an upper respiratory infection, please keep them home and take care of them."

It can be a tough call for parents to make, especially if their child's school has policies that discourage even legitimate absences. It might be that missing a few homework assignments to stay home and rest is much more preferable than going back too soon and ending up sicker, therefore missing even more school days, whether that's for your kid or one of their classmates. Kids aren't the best at keeping their germs to themselves, so it's up to parents to decide when a sick day is due. A pretty good rule of thumb? When your kid gets sick, ask yourself if it was another kid in their class, would you let your kid play with them? If the answer is no, it's probably a good idea to keep them home.