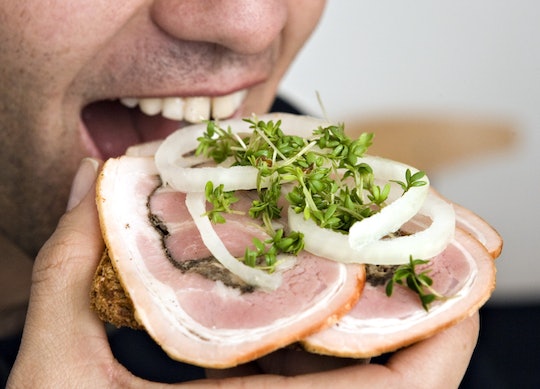 When Should You See A Doctor About Listeria? It's Not Something You Want To Put Off

Following the major recall of frozen vegetables sold at places like Costco, Kroger, and Trader Joe's, listeria is once again making headlines, and promptly making everyone super nervous about the peas they ate with last night's dinner. And, for good reason, unfortunately: according to NPR, when foods contaminated with listeria are consumed, it can lead to a condition called listeriosis, which can be deadly (this is why doctors advise pregnant women not to eat deli meat while pregnant, by the way). But while listeria is dangerous, there are things people can do to help themselves. Staying on top of food recalls and avoiding contaminated food as much as possible is obviously most important, but getting treatment if you think you may be affected is also crucial. When should you see a doctor about listeria? You probably want to get on that ASAP.

According to the Mayo Clinic, listeria is a food borne bacteria that won't harm most healthy adults, but in pregnant women, children, and individuals with weakened immune systems, eating contaminated food could lead to a lethal infection. The initial symptoms of listeriosis include fever, muscle aches, nausea and diarrhea, and usually begin a few days after contaminated food consumption (but can take up to two months to appear). If you suspect listeria is the cause for your symptoms, you will definitely want to seek medical treatment: if left untreated, the bacteria can spread to your nervous system, causing more severe symptoms like headache, stiff neck, confusion, loss of balance ,or convulsions (if you experience these symptoms, seek emergency care immediately).

What can your doctor do if you do indeed have listeriosis? According to the Centers for Disease Control, listeriosis can be treated with antibiotics. This is especially important for people who are considered high-risk for serious listeriosis complications, such as pregnant women, the elderly, and people whose immune systems are already compromised.

Consumed food that has since been recalled? You can go to the doctor just to be sure, but according to the CDC, if you don't have any symptoms, then you should be fine (even if you are considered high-risk).

The bad news, though, is that for people who do get sick from listeriosis, prompt antibiotic treatment isn't always enough to prevent death, which is why paying attention to recall announcements is super important. The best way to do this is to check the brand and UPC codes of your frozen veggies against the Food and Drug Administration's most recent list of food items involved in the voluntary recall, and either get rid of anything that might be contaminated, or return it to the store for a refund.

But since listeria isn't specific only to recalled food, there are other important ways you can keep yourself safe from a listeria infection. According to FoodSafety.gov, listeria is found most often in:

So while unpasteurized soft cheese is delicious, you probably want to give it a miss if you're worried about listeria. Other safety tips include proper hand washing after preparing uncooked food well (and washing down surfaces, too), thoroughly rinsing raw produce, avoiding cross-contamination between uncooked meat and produce, and ensuring raw meat, poultry, and seafood are cooked to a safe internal temperature.

Listeria might be scary, but there are things you can do to reduce your risk. And, when in doubt, it's best to see your doctor.