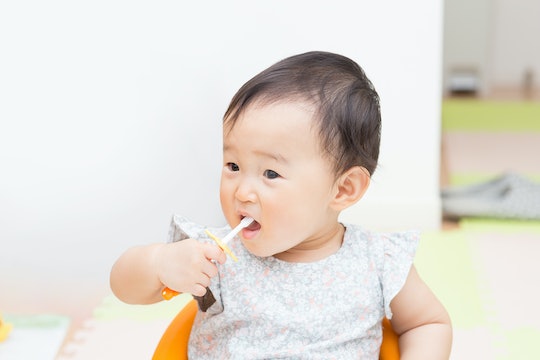 Here's When You Should Start Brushing Your Baby's Gums

"Don't, don't, don't bite your friends." Thanks, DJ Lance. Wise words from Yo Gabba Gabba. But beyond biting, teeth and oral health are extremely important. As soon as teeth push through the gums, they can decay, so it's important to have a routine. But when should you start brushing baby's gums?

It turns out, that you should be doing it early and often. Nationwide Children's Hospital noted that forming these healthy habits is essential to overall continued oral health. It's no wonder that the warnings issued are so dire. The California Society of Pediatric Dentistry found that cases of untreated dental decay and disease "compromises the child’s ability to eat well, sleep well, and function well at home and at school."

And an ounce of prevention is worth a pound of cure. Once decay is there, it's there. It has to be removed and it can't be treated, according to the American Dental Association (ADA). That means that the only way to repair decayed or diseased teeth is with a procedure like drilling or extraction, and no one wants that for their child. If you don't like having a root canal, and you're a grown-up in your 30s, imagine how stressful it would be for a child who has barely just begun eating corn on the cob.

The ADA has pretty strict guidelines about cleaning your baby's mouth and gums. So when should you start? The ADA suggested you begin when your baby is just days old. Much like how babies get used to taking a pacifier or having their hair washed, they also should get accustomed to having their mouth and gums cleaned.

How do you do it? The ADA recommended using a clean, damp gauze or washcloth, and rubbing it along all sides of baby's gums. When I was brushing my baby's gums, I found it helpful to tilt their head back in one hand, holding their head and neck securely, and using a washcloth wrapped around my pinky to make their gums sparkle. OK, they didn't sparkle, but they were clean. The New York State Department of Health noted that this routine should be done after every feeding. I will admit, I did not adhere to this. My son ate every two hours on the dot — for six months. Even in the middle of the night. I was not about to rub his gums when all I wanted to do was sleep. But I did do it several times a day with my kids.

It's all about starting the healthy habits that will continue throughout their lives, and preventing any possible decay from occurring. Now if I could get them to not make a mess of everything with the toothpaste, I'd be so very happy.

More Like This
30 Marvelous Baby Boy Names That Start With “M”
How Hot Is Too Hot For Babies? Experts Weigh In
23 Sweet Quotes To Dedicate To Your Rainbow Baby
"Crybaby Ambulance" In Europe Will Help Exhausted Parents