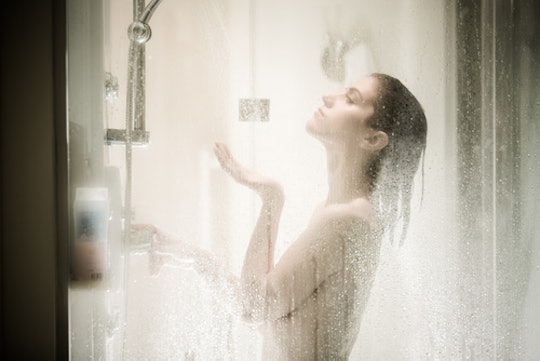 Is It OK To Be Naked In Front Of Your Kids?

In B.C. years (that's Before Children), you'd think nothing of walking naked from the shower to your closet or being topless for a few minutes while you hunt through the laundry pile for a bra. And when your baby was still a baby, you probably didn't change your naked ways all that much. But as your child gets older and refuses to let the bathroom door close unless they're on the other side with you, you might start to wonder if you need to to start covering up. Is there a point at which allowing your kids to see you naked isn't the best thing for their development, or is simply inappropriate? Or should you strut your stuff in the buff without caring if your kids see?

Of course, it's ultimately up to you whether you feel comfortable enough to be in your birthday suit around the house. But therapist Dr. Lynn Fraley told Romper that allowing your kids to see you naked won't harm them at all. In fact, it could even be good for them. "The few studies that have been done in this area have found that children who were exposed to parental nudity benefited from it," Fraley, a therapist based in Spokane, WA, explained. "Increased self-esteem and comfort with physical love and affection are present in households where children weren’t sheltered from the human body."

With that in mind, we asked some parents when they started to be more conscious of being naked around their kids. Turns out, age isn't a factor so much as how the child feels — and how you feel about it, too.

"I recommend that families take cues from their children. They will let you know what makes them feel uneasy and it is your responsibility to be aware of their feelings."

Fraley said that this approach of waiting for your kids to tell you know when it's time to cover up is spot-on. "I recommend that families take cues from their children. They will let you know what makes them feel uneasy and it is your responsibility to be aware of their feelings."

Some parents think that it depends on the age of the child, as well as the gender. Wendy, a 39-year-old mom of two, told Romper that while she previously didn't have an issue with letting her sons see her naked, as her older child gets closer to puberty she's beginning to reconsider. "I'm just starting to feel sort of uncomfortable about it with my 10-year-old. I've started to hear him make sex jokes with his friends (nothing outrageous and most of it over their heads!)" she told Romper. Around her 4-year-old, however, she sees no issue with, say, being in the buff around the breakfast table.

Many moms feel that being nude in front of their kids can be a teaching moment for them. Thanks to the media's unrealistic representation of what real female bodies look like, some women deliberately decide not to cover up around their daughters to allow them to see what a female body looks like without Photoshop.

"I have 2 girls, ages 3.5 and 9.5. They see me naked all the time (mostly because they seem to love to talk to me when I am in the bathroom or getting dressed!)," Melody, 38, told Romper. "I never thought about not letting them see me naked. I guess I want them to feel comfortable with their bodies and not have to rely on the media for an unrealistic perception of how their bodies should look."

"I think it's important she sees a 'normal' female body regularly so she knows not everyone is a model."

Valerie, 35, also felt that allowing her daughter to see her nude teaches her an important lesson about body image. "My daughter is 9 and I am still naked in front of her sometimes, which I see as NBD since she sees naked strangers in the YMCA locker room whenever we go swimming," she told Romper. "I also think it's important she sees a 'normal' female body regularly so she knows not everyone is a model."

This message of self-empowerment is crucial, according to Dr. Fraley, who warned that our kids can tell when we're not feeling comfortable in our own skin. "Hiding behind towels and generally feeling discomfort with your body will absolutely affect the way your children perceive themselves," she says. "If you are ashamed of your nakedness, how can you expect your children to feel good and embrace theirs?"

"If you are ashamed of your nakedness, how can you expect your children to feel good and embrace theirs?"

Dr. Wyatt Fisher, a marriage counselor in Boulder, CO, agreed. He suggests being nude around your kids when you feel like it, with the caveat that you stop allowing children to see their parents naked once they start to take serious interest in what's between their legs. "You'll know you hit the age when your child moves from seeming oblivious to your sexual organs to constantly staring at them, making comments about them, and giggling about them," he says.

That's precisely what prompted Jennifer, a 34-year-old mother of 4, to stop being naked around her then-5-year-old son. "He started asking a lot of questions (which I answered in terms he could understand) and there was a lot of staring going on after that so I figured it was the right time for a little more discretion," she explains. "He'll still barge in on me in the bathroom though, if there is something he really needs." It's also different for men, she pointed out: her husband stopped being naked in front of their kids the second they "pointed a certain something out."

Worrying about at what point you may go from boosting your child's self-esteem to causing more harm than good seems stressful, but moms who've been there say the decision to cover up isn't something they had to debate. The transition will happen naturally when everyone's ready.

"The human body is a beautiful thing and I think it’s very important for small children to know that it’s normal and natural to be naked."

It's also important to teach our children that nudity can be totally appropriate depending on the situation. "Something as incredible and nurturing as breastfeeding should not be hidden and acceptance of our bits and pieces should be celebrated." Dr. Farley reminds us. "The human body is a beautiful thing and I think it’s very important for small children to know that it’s normal and natural to be naked."

So follow your instincts and let your kids be your guide, instead of feeling like you have to stop being naked around them once they reach a certain age. As they develop a sense of modesty and approach puberty, they should show signs of wanting more privacy, which includes having you cover up. As long as they're cool with seeing you naked, you don't have to stress over whether you locked the bathroom door. But it's not a bad idea to have a pretty bathrobe on backup, just in case.