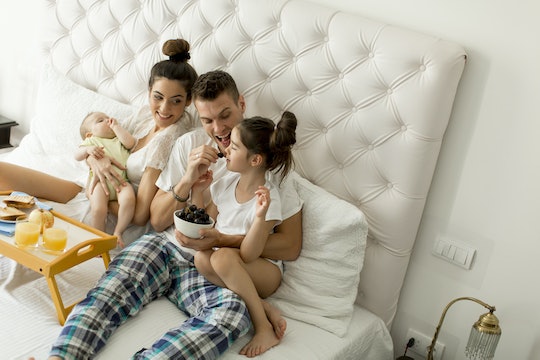 It's A Pain, But Here's Why You *Need* To Keep Cutting Your Kid's Grapes In Half

I am a bit of a worrier. If there's something out there that can prevent worry, I will do it or use it. So when it comes to my children's food, I've always been very nervous about introducing foods, teaching them to feed themselves, and chopping or puréeing the heck out of their foods. This is especially true for the major choking hazards that are grapes. Unfortunately, they're also one of my kids' favorite foods. But, when should you stop cutting grapes in half for your kids? Because sending quartered grapes in my fourth grader's lunch box seems like it might garner some looks from his friends.

While it's tempting to be the mom who follows their child around with a pair of kitchen shears in their purse to cut up every last bite of food that enters their mouths, that's not really feasible. According to research, you can stop worrying as much after a child turns 5 years old. This, noted the scientists published in the International Journal of Injury Control and Safety Promotion, is the age when kids seem to grasp the need to thoroughly chew their foods, though they still benefit from the odd reminder from their parents to "slow down" and "chew well." But before your child hits 5, you need to still be slicing up those grapes into neatly edible quarters.

If I'm being honest, my daughter was pushing 7 before I stopped entirely. To this day, if I buy those huge globe grapes, they're getting sliced. Heck, I slice them for myself because it simply makes for a more pleasant eating experience. I get that it's a complete pain in the butt when you're trying to feed your kid, but it's better to be safe than sorry. According to the American Academy of Pediatrics (AAP), choking is one of the leading causes of death among children 3 years old and younger. But that period between 3 and 5 isn't perfect, as anyone with a threenager will loudly agree. Kids at that age are crap at sitting still and managing a meal without making a huge mess, so you know that being thorough with eating isn't a strong suit.

And the risk is very real. Children over age 4 can and do choke to death on grapes. That's why the AAP recommended that you should "cut foods such as grapes into small pieces and shapes that won’t block airways." I find that the easiest way to do this, especially if you're in a hurry, which, let's be honest, moms almost always are, is to use a tool specifically designed for the job, like this grape quarterer by OXO. It seems a silly tool, but trust me, there's nothing faster. It's especially good for people like me who have limited use of their hands.

I spoke to one of my son's speech and feeding therapists, Alex Kendrick, and asked her for an official cut-off date. She tells Romper that kids are simply too speedy and too busy to eat whole grapes. "Waiting until your littles are 5 or 6 is really best, and quartering is even better than cutting them in half." She admits this is a ginormous pain, but cautions, "you want the pieces small enough that they won't occlude the airway." Kendrick also notes that this timeframe should be extended if your child isn't a great chewer or has sensory issues. Like everything, much of it is dependent upon the individual child. "Some kids benefit from having their food in smaller portions for a longer period of time," she adds.

Kids like me apparently, because I love a good quartered grape. Pro tip, use the grape slicer for cherry tomatoes on your salad, too. You'll never go back. And it's just safer, isn't it? Safety first.