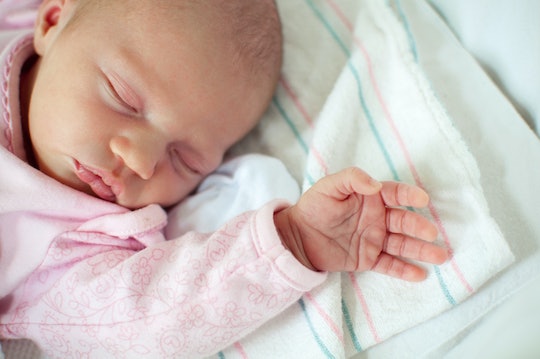 When You Should Transition A Baby Out Of A Bassinet, According To Experts

Of all the important decisions parents make, choosing where baby will sleep is arguably one of the first and most important. While the options are seemingly endless, most parents choose a bassinet as their baby's first sleep space. That sleep space isn't permanent, though, and eventually the sleeping cherub will need to make the switch to a larger sleeping environment. So when should you transition your baby out of a bassinet? While every baby is undeniably different, there is a guideline parents can follow to make sure their little one is as safe and secure as possible.

It's not uncommon for new parents to choose the bassinet for their baby's first sleep space, as it's smaller than a crib and can fit comfortably and safely next to an adult's bed. Since the American Academy of Pediatrics (AAP) encourages parents to sleep in the same room as their babies for at least the first year of a child's life, a small bassinet might just be the perfect environment for a baby that can simultaneously facilitate safe, recommended co-sleeping.

Some babies will quickly begin to outgrow their bassinet, though, so a necessary move to a larger sleep space — like a crib, for example — might come sooner than some parents think.

Knowing when to make the change from bassinet to a crib is not an exact science and, instead, will all depend on how your baby is developing and growing. What To Expect tells parents "pediatricians often recommend making the switch from a bassinet to a crib between 3 to 6 months, when most babies are rolling over and starting to spit up." What To Expect also encourages parents to check to see if there is a weight limit on the bassinet itself, which is often found in the instruction manual, saying that some are as low as 10 pounds, while other bassinets are made to accommodate a 20-pound infant.

With those guidelines in mind, you can easily look for cues as to whether or not your baby is ready for a transition, and shift your focus from the "when" to the "how." Thankfully, The Baby Sleep Site has some recommendations for how to successfully get your baby to transition to a crib, starting with putting your own bed in your baby's room, swaddling, and sleeping with your baby's crib sheet so they can smell you while they sleep.

Linda Szmulewitz, from Sleep Tight Sleep Consultants, says that making the change can be hard on parents, so don't get down if the overall process isn't necessarily smooth. In fact, Szmulewitz goes on to say, "There is a bit of sadness that accompanies this change as it is one of the first moments when parents begin to realize how quickly their babies are growing and changing."

Although knowing when to make the move and change your babies sleep area isn't always as clear as us parents would like, knowing what to look out for and how to successfully make the transition can make all the difference in the world. Happy sleeping (hopefully), parents!