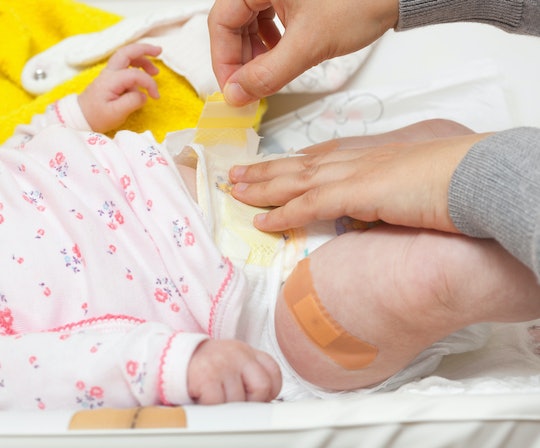 When Should Your Child Get The MMR Vaccine?

Keeping up with your child's immunization schedule can take a bit of work, but it's more than worth the effort to protect your little one from devastating illnesses. With this in mind, when should your child get the MMR vaccine, and what does it protect against? Measles, mumps, and rubella are no joke.

As explained by the Centers for Disease Control and Prevention (CDC), your child will get two doses of the MMR shot. The first dose will be needed when your child is between 12 to 15 months of age, and the second dose is administered when your child is 4 to 6 years old. In addition, if you're bringing your 6 to 11 month old infant abroad, then one dose of the MMR is suggested, according to the CDC.

Fortunately, receiving the actual vaccine is not a big deal for most kids. According to the National Health Service, the MMR vaccine injection is given in the thigh or upper arm. In most cases, any redness or swelling at the injection site fades quickly, and your kid is good to go. Serious allergic reactions are rare.

Next, it's important to understand why your child receives this particular vaccination. Because the vaccine has effectively eliminated the disease in many parts of the world, chances are you've never encountered measles in your everyday life. According to the Mayo Clinic, the symptoms of measles typically include a sore throat, fever, and skin rash. Although these symptoms sound relatively mild, it's the potential complications that arise from measles that are problematic. This highly contagious virus can result in complications such as encephalitis, severe diarrhea and dehydration, blindness, and pneumonia, according to the World Health Organization (WHO). What's more, measles is still a leading cause of death among young children globally, as further noted by the WHO. The vaccination has already made a huge impact, however: the number of measles-related deaths decreased by 79 percent from 2000 to 2014, as explained by the WHO.

What about the other two parts of the MMR vaccine? Mumps and rubella are terrible diseases in their own right. As noted in KidsHealth, mumps is virus that causes painful swelling in the salivary glands. Prior to the vaccine's 1967 release, over 200,000 cases of mumps occurred in the U.S. each year; now, there are fewer than 1,000 yearly cases in America, as further explained in KidsHealth.

Lastly, rubella (AKA German measles) is a contagious viral infection with similar symptoms to measles, although the infection is typically less severe, as explained by the Mayo Clinic. However, rubella can cause devastating consequences for developing fetuses through congenital rubella syndrome. As noted in Medical News Today, congenital rubella syndrome can cause deafness, congenital heart disease, retinal damage, and a host of additional birth defects. Thankfully, the MMR vaccine's efforts has already paid off for many children. According to The New York Times, rubella was officially eradicated from the Americas in 2015. Hopefully, the MMR vaccine can continue to protect children the world over from measles, mumps, and rubella, ensuring a healthier future for everyone.