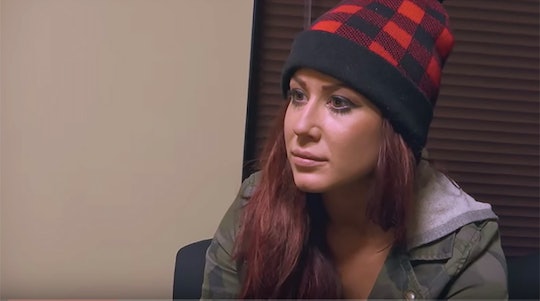 Why You Won't Know When 'Teen Mom 2's Chelsea Houska Goes Into Labor With Baby No. 3

It goes without saying Teen Mom 2 fans are psyched for Chelsea Houska to welcome her third child. People are so excited, in fact, that there's a rumor going around Houska already gave birth. Not only is the gossip false, but Houska took to Twitter on Wednesday to inform fans that her labor will be private. And if you're wondering why supporters will be kept in the dark when Chelsea Houska goes into labor, it probably has to do with her privacy concerns. As some viewers already know, Houska has experienced some scary fan encounters (with her young kids in tow, I might point out) numerous times before.

Houska — mom to Aubree, 8, and Watson, 1 — is ready to welcome a baby girl into her family come September. At this stage of the game, Houska is ready to be done with her pregnancy, a fact she confirmed back in July. "Apparently my “over it” stage of pregnancy hits at 33 weeks 5 days because 😐😐😐😐😐😐 #notmuchlonger," Houska tweeted at the time.

The good news for Houska is she's literally in the home stretch of her pregnancy, especially since she tends to deliver early. Aubree, born on Sept. 9, 2009, was five weeks early, while Watson arrived 20 days before his Feb. 14, 2017 due date, as she shared on Twitter. Houska even predicted Watson would enter the world a bit early, writing on Twitter: "My guess is Feb 2! lol Coles thinking more end of Jan."

Considering Houska has delivered early in the past, it's not too far off to assume she already gave birth to baby number three.

Additionally, some fans took her recent break from social media as a sign the delivery already went down. One person even started a thread on the Teen Mom OG & Teen Mom 2 Reddit, titled: "Chelsea Has Been Quiet On Social Media - Think She Had Her Baby?"

And one brave fan went directly to Houska herself, asking on Twitter: "Thought you was in labor now? Just seen a post saying you was."

Houska, however, shut down the rumors ASAP. "I can promise everyone that whenever I AM in labor...nobody will know..and there def won’t be posts and silly little articles about it," Houska said on Wednesday via Twitter.

Although it's reasonable for fans to be curious about Houska's pregnancy, she's under no obligation to inform anyone about when she goes into labor. For starters, the only thing on Houska's mind that day should be the health of herself and her baby. Not to mention, this is a private family moment. Houska and her husband, Cole DeBoer, deserve to enjoy the birth on their own terms before anyone else finds out.

Lastly, it's important to consider the frightening experiences Houska has had with fans in the past. "I recently had a grown man come to my door, in the middle of the day when I was home alone with both kids, asking for a picture ... ," Houska tweeted in April. Yikes.

Houska went on to say about the incident in a follow-up tweet:

I was very uncomfortable and said I didn’t want to take a photo. Aubree was scared. I think he was harmless, but it’s just the fact that a man would do that. My husband came home from work early...it was just an all around uncomfortable situation.

In light of this experience, it's not difficult to see why Houska goes out of her way to keep her personal life private. Fans should probably keep this in mind during the final weeks of Houska's pregnancy, as she deserves to enjoy this special time exclusively with her loved ones. And when Houska does give birth, I'm sure she'll fill in fans when she's ready.