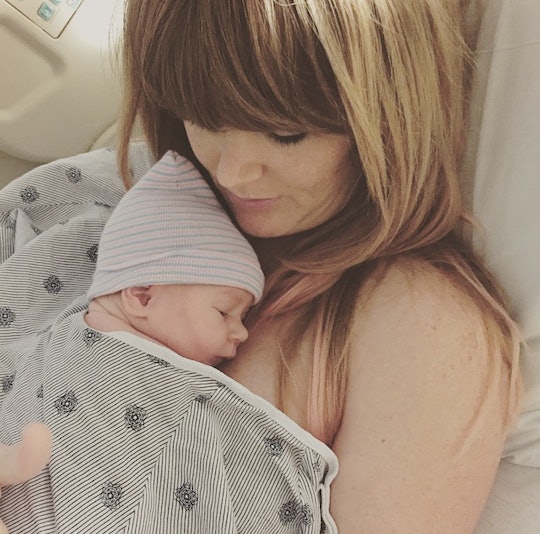 When The Umbilical Stump Won't Fall Off

I have it on good authority that placentas are a beautiful work of architecture that should be admired upon exit. I wouldn’t personally know because mine was ladled into a plastic bowl and tipped into an orange garbage can along with all the sodden gauze while I endured the ceremonial Stitching Of The Gaping Maw post-delivery. But I have seen pictures. Natural, almost pulsing in its vascular intricacy. A monument to a mother’s handicrafts. A maybe ingredient for smoothies. There is the glorious placenta, and then there is the umbilical cord stump, which hung on for weeks with my daughter, emerging from her yellow belly the blue-grey of asphyxiation. That thing is gross as hell.

I was “induced” for my first birth, which is a kind way of putting it if you ask me. Inductions are a cold open, sex without foreplay. Your cervix can be squeezed entirely shut, devoted to keeping things safe, and a wily doctor will trigger world-ending uterus contractions to jack it open. Remember that scene where Luke props open the trash compactor in the Death Star with a thin metal rod? It’s like that. It’s a jabby way to get things done, a way of jamming the machine and doing a manual takeover in your Storm Trooper disguise. From there, it was a cool 12 hours of pitocin and contractions that originated in the spaces between my lumbar vertebrae until I opted in to epidural anesthesia — the deciding vote was my body, involuntarily vomiting through wall-to-wall contractions. (There were no waves to ride out, Ina! No cresting contractions and glimmering focal points, just the crippling mechanics of a forced labor.) I would highly recommend the epidural.

I got some sleep after that, trying not to think about the expectant grandparents sitting in their driveway with the engine idling, waiting to screech out of the Bat Cave to meet the baby. Some hours later, I was woken and told that I was all the way dilated, even though I don’t remember anyone checking. Did they peek between my legs and see a glowing Stargate oscillating there, beckoning the baby out before it closed? Did they stick a fist up there while I dreamed dreams of Jason Priestley smoothing my hair? I do not know.

Having rolled out the red carpet for my baby down an enormous corridor, I was promised that it would be “just a few pushes” and I would have my baby.

Three hours later, Scout was still inching down the birth canal as the OB-GYN told me, “I gotta sign off at 7, I’m on office hours now, COME ON. PUSHHHH," adjusting her latex gloves impatiently while she half-heartedly traced circles on my perineum with her thumb. During my hundredth attempt to shove Scout's head toward the light, the OB nicked the skin below the opening with her scalpel and out my daughter flew. Scout was as displeased as me by proceedings. I saw her little face in a grimace as they spirited her to a table to be suctioned for poop. Then they plonked her on my chest and we both just lay there, buggered. I guess my husband cut the cord? Who knows.

What surprised me was how long the stump was, clipped with a plastic tag that made it look like she wasn’t all the way out of her packaging, post-unwrapping. A perfect, beautiful baby, and then this dolphin-colored knot of sausage casing on her pristine belly.

I knew a total of nothing about baby care — nothing about nursing, nothing about how to change a diaper or get a onesie over her head — and one of the things we were entrusted with upon checking out of the hospital was care of her stump, by now a mercurial grey. It was one more thing I didn't really know how to handle, alongside figuring out what kind of mother I was, knowing what a schedule is or should be, knowing how to handle my parents idling on the couch for hours upon end looking at their iPads (I was so happy they flew all the way over from Australia for the birth but I also wanted to just go into a cave and emerge in a month's time when Scout wasn't nursing for 50 minutes of every hour?), et cetera.

Once a day, we would give Scout a sponge bath which she HATED, dabbing around the festering edge of the umbilical cord stump, janitors to Hell's gateway. The doctor promised that the stump would fall off by itself within 10 days, but even as Scout sharpened her eyesight and began to bob her head around the room, the nasty serpent on her belly blackened and clung on. "Isn't she beautiful," said my mum. "Eww, that doesn't look good," she addressed the stump, which was by now reddening at its base.

At a checkup, the doctor agreed that it needed a helping hand and got out a special matchstick with silver nitrate on the tip to help cauterize the base of the thing. We were told we could then use rubbing alcohol to dab around the edge, and that a little weeping and blood was okay. Seeing as it was the place that life had first attached, I supposed some adjustment was to be expected. Going from one side of existence to the other, sure, some scabs to work through.

Back at the apartment, I was emerging from the boot camp of early days with seemingly a vague idea of how breastfeeding worked, and the ability to change a nappy in the dark at night without waking my husband. I had some skills. But I still felt vaguely adrift when I was outside the immediate world of me and baby.

Between birth and the six-week checkup, you're nowhere. There are no guideposts. There is sporadic crying, there is joy, everyone is in diapers, there are many many iPhone photos. I was so thrilled at the sight of my parents holding my baby; I wanted to see no one. I was a mother now, but in the presence of my parents still a petulant teen growling leave me alone. We are not a demonstrably affectionate lot — too much British blood there. We are uncomfortable with emotion; I can well understand the popularity of unconscious birth in the near past. The arrival of a baby compels you to feel and express, but I didn't want to.

One of the things I regret most from the early days was my impatience with my parents. I have Indian friends for whom tradition dictates their mother will fly over and live on their couch for a month after birth when they delivery a baby in the U.S. I cannot imagine it. My parents were down the road at an Airbnb that turned out to be a guy sleeping on his couch and renting out his bedroom. It was fine. But first thing in the morning, they'd text: "Ready for us to come see Scout?!" And I was. I just wished I wasn't attached to her. Wished I could hand my amazing little baby over and disappear into the ether, away from my human form. I was overjoyed but tired and, I must assume, cranky and ungrateful. Thankless for their great journey halfway around the planet to meet their grandchild.

The stump was hanging on by a thread on the morning my parents arrived with their day bags to little fanfare from me. It's possible I ignored their entrance in my stupor. I was dressing Scout on the change table in her room when I heard my dad say, "Tony, oh no," with a sort of a suppressed howl. I clutched Scout to my shoulder and padded lightly out to the living room where my mum and dad were hugging.

A day, ten days, two weeks, it is a short time and it is also an age. When they left Australia, our good family friend Tony — my friend's dad, who was in my parents' wedding — was doing well on chemo. But then, the second my parents slipped over the dateline, gone. "I'm sorry," I said, swallowing hard, this selfish beast blessed with a magical, plump baby in her arms.

We had to go back to the doctor to lance the umbilical granuloma that remained one more time — a navy seed in the middle of her belly button, which resolved thereafter. My parents missed the funeral. By the time they flew home, back across the continent then across an ocean, blue had ripened to red, and red had settled to pink. An arrival. A departure.

There is a gaping wound that accompanies your arrival to motherhood. It does not regenerate right away. For a time there is a messy, sticky reminder of where you came from. You tend to it, and get used to looking at it, and you realize that it is part of the scene, not an anomaly. It will fade, but you don't forget it. You say goodbye to your parents, your new baby pressed between you, and tell them you love them.

More Like This
Does Pumped Breast Milk Have Antibodies? Experts Weigh In
Why Does My Baby Cough While Breastfeeding? Experts Explain
9 Reasons Why Some Women Can't Breastfeed
The Morning Rush Is Parenting At Its Most Essential