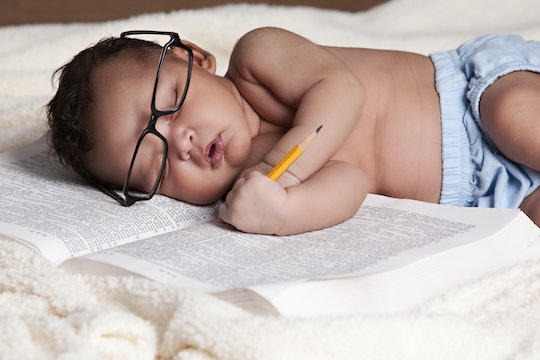 When To Give Birth If You Want Your Baby To Be Rich & Successful, Study Suggests

Every parent wants to set their child up for success. But can the day you give birth determine whether or not your child becomes a billionaire or a Nobel Prize winner? Well, according to a study conducted by Tombola, gaming company in the United Kingdom, certain birth dates may indicate greater success in life. In fact, they pinpointed exactly when to give birth if you want your baby to be rich and successful later in life.

In a quest to uncover which birth dates or months might lead to the greatest success, Tombola examined the birthdays of more than 1,700 successful people they classified as "thriving" in industries such as TV, film, music, sports, business, philanthropy, and more. Ultimately, they found that "there are certain birth dates or months that indicate you’ll have more success" in various different career fields like politics or business or entertainment. In fact, Tombola reported that being born on a certain day could even boost a person's chances of winning a Grammy, Oscar, or Nobel Prize.

According to Tombola, the best day to give birth if you're looking to set your baby up for success is June 6. "For the best chance of overall success, 6th June is the optimum date to be born," Tombola reported, adding that of the 1,753 people whose birthdays they examined, more were found to have been born on June 6 than on any other day.

But parents who hope to set their child up for financial success, specifically, should aim for an October birth, according to Tombola's findings. The company found that Oct. 13 seemed to be a specifically advantageous birthdate for those who are rich. In fact, according to FamousBirthdays.com, Stranger Things actor Caleb Mclaughlin, singer Paul Simon, Tiffany Trump, South Korean singer Jimin, and Sacha Baron Cohen are just some of the many rich and famous folks born on Oct. 13. Other billionaires born in the month of October include Microsoft founder Bill Gates.

Those eager to see their son win an Oscar for Best Actor in a Lead Role should try for an April birth, according to Tombola. According to the study, 17 percent of actors who've won the award since it was first handed out in 1929 have been born in April. But if you're aiming to see a daughter take home the award, you may be better off giving birth on June 19. Tombola's report found that 12 percent of recipients of the Oscar's Best Actress in a lead role award haven been born on that day.

And if you'd prefer a Grammy winner in the family, Tombola found May to be the best birth month, citing Lauren Hill, Stevie Wonder, Adele, and Billy Joel as past winners with May birthdays. If you'd like your baby to grow up to become an Olympic athlete, Tombola's study found March 15 was the best day to give birth. For Nobel Prize winners, it was June 15 although any day in June may work. According to Tombola, a whopping 88 Nobel Prize winners have June birthdays.

But Tombola isn't the only organization to examine the relationship between birthdays and careers. For example, a study conducted by the U.K. Office of National Statistics found that babies born in January have a higher chance of becoming doctors, according to USA Today. The news outlet also found that a separate study examining the heads of S&P 500 companies from 1992 to 2009 concluded that March held the highest percentage of CEO birthdays, suggesting babies born in that month may have increased odds at leading notable companies.

What's more, a 2017 study in the National Bureau of Economic Research found that students born in September (making them among the older kids in their school year) had a "higher yearly score average" than students who fell at the younger end of the spectrum.

So, while Tombola's report may not be the most scientific data out there, it's certainly a fun way to think about what your own child might grow up to accomplish — and how the day you gave birth may have been what started them down the path to success.