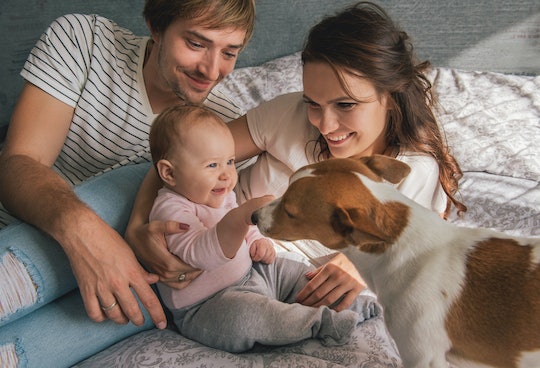 Here's When You Should Introduce Your Dog To Your Baby

You watch as the space on your lap where your furry friend lays his head dwindles as the months of your pregnancy go on. He's such a sweet dog, but you worry, "Will he be sweet with the baby?" And, how do you know when to introduce a dog to your baby?

I know that I was fit to be tied with this when I had my first. When my son was born, I had one very well-trained (K-9 training by police husband) Akita, and one very sweet, but very, very, derp-y Rottweiler (super not trained for anything but going outside and giving kisses, training by moi). He loved everyone, but often, his love was a bit exuberant. He'd been around lots of babies and children, but never for a protracted period of time and my baby was coming to stay. How did I introduce my sweet son to my sweet pup? I didn't know when to safely introduce a dog to my baby or how to keep my dog from losing its mind.

According to the American Society for the Prevention of Cruelty to Animals (ASPCA), the process of introducing your dog to your baby should begin a few months before your baby is born. This is a multi-step process, not an overnight thing. And for their part, the Humane Society agrees.

Having a baby doesn't just toss your world into life's food processor, it does the same thing to your dog. According to the ASPCA, there are ways to ameliorate the impact of such an upheaval if you take the time to prepare. The organization suggested that a few months out, start working changes into your dog's routine. Because your routine will change so wildly with baby, so will theirs. If you prepare them for this eventuality, they're less likely to act out, noted the American Kennel Club (AKC).

The AKC also recommended that you back off how much time you lavish on them in the months leading to baby's birth. You may be tempted to go a little crazy with attention to the family dog, knowing that one-on-one time will be less prevalent, but maybe throwing them a dog wedding and scheduling puppy massage classes when you're in your third trimester is not the best idea. (I'm not saying I did this. I'm not saying I didn't do this.)

The ASPCA also encouraged you to establish new rules now. Will the dog be allowed in the baby's room? Make that clear to your puppy. If he is allowed, let him get a feel for the place. Give him a place in the baby's room that isn't underfoot, and keep some treats in there so that the dog associates this space with more than just an angry screaming teacup human who frequently smells as if they're trying to mark themselves as their own territory. Make sure your dog has a safe spot that is only his — a baby-free zone where he can have puppy personal time.

The AKC suggested that you get baby ready by using a baby doll around your dog, and things that smell like a baby, for example, baby lotion, butt paste, formula, and the like. The AKC asserted that it is important to get them used to the noises of a baby, too, so playing the sound of crying, or of beeping toys (that make you want to pummel whoever bought them for your child) can help. I know that my dog was terrified of my breast pump — he thought it was maybe trying to kill me through my nipples. One day, when I was finished pumping, he made off with it and left it under the bed.

Know how your dog handles, well, handling. The ASPCA warned that you should get a puppy ready for being poked, pulled, prodded, and generally annoyed by the tiny creature from the womb lagoon. This way, he's not startled when the baby leans over and falls on him. (Because that will probably happen.)

Getting closer to baby's arrival, The Humane Society urged you to make certain that your dog is up-to-date on vaccines and nail trimmings. When you're in the whirlwind of newborn land, this isn't something you're likely to remember to take care of, so it's best do it before baby arrives.

After the baby is born, the AKC is very specific on when to safely introduce your dog to your baby. While you're in the hospital, have your partner or a friend bring home something that smells of the little one, like a hat the baby has worn, or a blanket the baby has been cuddled in. When you go home, greet the dog first — sans your newborn. Then, let him in the room, but not approaching, just acclimating to the baby. The AKC then suggested to allow the pup to smell the baby on-leash. Pet the dog while he does this and let him feel reassured that his kindness toward your baby is rewarded with your kindness toward him.

Then you go off-lead. The dog should be more ready at this point, but the American Veterinary Medical Association (AVMA) hastened to remind parents not to forget that when the baby starts moving, teach the baby to not be a jerk to the dog. No kicking, pulling, biting, and other forms of toddling shenanigans. Also, according to the AKC, you should never leave your baby or small child alone with even the most docile dog.

I will say that all of my worries were unfounded. Frankie was an angel with my baby, and so was my Akita, Brownie. They were the three best friends that anyone's ever had. With some patience and trust, your dog and baby will be BFFs, too.