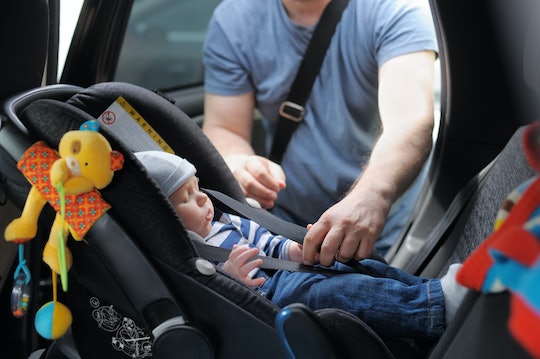 Here's When You Should Replace Car Seats

When it's time to acquire all the necessary gear for your little one, few purchases are more expensive or confusing than the car seat. Seriously, trying to pick out a model that's right for your car, budget, and safety standards can drive you bonkers. With that in mind, it's also important to know when to replace car seats. Unfortunately, the car seat that you used for older children or one that's been given as a hand-me-dow, may not be as safe as a newer model. Even if your baby budget is stretched, the car seat is one purchase that needs to be in the best condition possible.

It's a given that you'll replace the car seat after a particularly severe car crash. But what about a minor fender-bender? According to the National Highway Traffic Safety Administration (NHTSA), car seats may not need to be replaced following a minor crash, provided this crash meets certain criteria. Included among the five criteria: the vehicle was drivable immediately following the crash, no injuries were sustained, and the air bags did not deploy, as further explained by NHTSA. If you're not absolutely certain the car seat sustained no damage during the crash, then it may be safer to err on the side of caution with a new carseat.

Next, it's crucial to pay attention to the expiration date on your carseat. At first this may sound ridiculous: how can a bunch of plastics and seat belts possibly expire? But this is not just a marketing ploy. As noted in Very Well, car seats have an expiration date because the materials do wear out over time, they are only tested for a certain period, and safety technology changes over time. In general, the newer carseats will use the most updated technology, and they will not be as worn as their used counterparts. In general, a new carseat is useful for six to eight years, as noted by NHTSA. After that, it's probably smart to go with a newer model.

Lastly, it's smart to stay on top of the car seat recalls. Granted, this can take a bit of effort, because it seems like the list of recalled baby accessories is endless. If you're even a little concerned, then reading through the CarSeat.org list of car seat recalls may help put your mind at ease. Whether you just need a replacement part, or an entirely new carseat, this is one piece of baby gear you need to be as safe as possible.