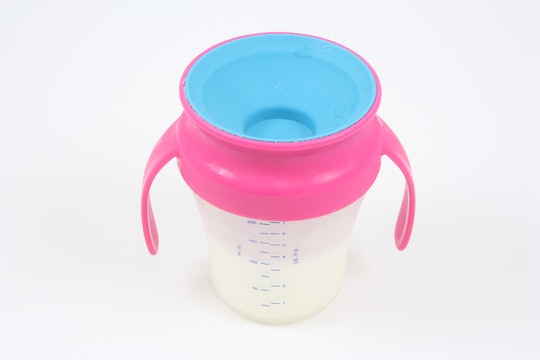 Here's When To Replace Your Baby's Sippy Cups

If you've got a toddler in your house, chances are you're well-versed in the land of sippy cups. Once you've successfully made the transition from bottle to sippy cup, it's a whole new world. You become extremely familiar with where your child stashes their sippy cups (between couch cushions, on unsuspecting shelves, underneath the dog bed), and you know exactly which sippy cup is your child's favorite (lime green lid, or there will be tears), but do you know when to replace your baby's sippy cups?

Since your child's sippy cup is in their mouth all day long, it's important to consider if and when they should be replaced. And especially if sippy cups are recalled, the stress to keep sippy cups clean and mold-free became an even bigger deal than it already was.

According to Baby Center, if any of your child's sippy cups have deep scratches or grooves in them, you'll want to toss them. Any scratched or damaged bottles or cups of any kind can harbor bacteria in the grooves, even if you're cleaning them regularly. The moms in the Baby Center online community range from using disposable sippy cups, to boiling them in vinegar water every few weeks to clean and rid them of the smell, to never washing them at all. However, according to an expert, you should definitely be replacing your kid's sippy cups, and not just relying on the dishwasher to deep clean those bad boys.

Academy of Nutrition and Dietetics spokesperson Angela Lemond told Real Simple that “daily sippy cups should be replaced every month or two max." That's a lot more often than anticipated. “Kids are typically pretty hard on them and to avoid deep scratches in that amount of time is nothing short of a miracle," Lemond said. And during those one to two months of use, you'll want to make sure you're cleaning those cups properly. According to Lemond, it's not enough to toss the cups and lids in the dishwasher and assume they're coming out squeaky clean. Bacteria can grow in even the tiniest places in a sippy cup, so it's important to separate all of the pieces of your sippy cups before cleaning them.

On top of separating the cups, Lemond recommended hand washing them over relying on your dishwasher, for the best outcome. “Hand washing in hot, soapy water with a bottle brush allows better access to the nooks and crannies of a zippy cup top, so that is typically the best way,” Lemond said. “Every so often, depending on the frequency of use, sanitize the tops in boiling water for two minutes.” Keeping up with the disposal and the cleaning of sippy cups will help ensure that your child is staying as healthy as possible with their favorite cups.