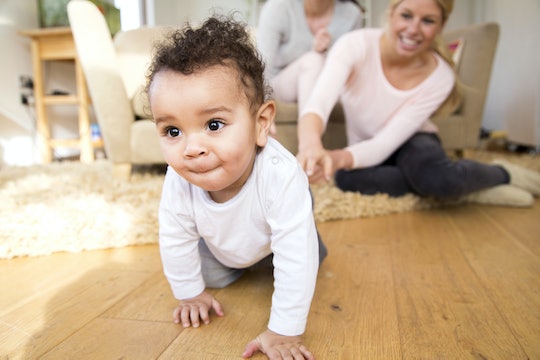 When You Should Stop Swearing In Front Of Your Baby. Hint: Like, Yesterday

If you tend to have a relatively dirty mouth, it's not always easy to stop cold turkey once you have a baby. Some people regularly pepper their language with expletives and others save them for stubbed toes and dishes crashing. Others just curse more when they are tired, and as new parents, that could happen a lot. If you're concerned about the effects of this on your child, you way wonder when you should stop swearing in front of your baby.

Researchers at the University of Pennsylvania have found that children start understanding concrete words at around six to nine months and more abstract words closer to fourteen months. Maureen Healy, an expert in child psychology and author of Growing Happy Kids, tells Romper that babies can probably begin grasping "bad" words at about eighteen months old. Healy prefers for parents to avoid cursing in front of their children, but knows that even with the best of intentions, occasionally words do slip out. If you have older kids around when the F-bomb appears, the critical thing is to have a sense of humor about it, because laughing together, about this and other things, makes the parent and child bond stronger.

If you're in a house where you feel more comfortable cursing in front of the kids, Important to make it clear to them that they shouldn't use those words at school, explains Healy. I can relate to that piece of advice, as I'll never forget the day my daughter came home from kindergarten extremely worried about something she had done in school. When I asked her what happened, she said, "Well, mom, we were doing rhyming words." She buried her head in her hands. "And I got duck."

Our society tries to limit the swear words that children hear. The Motion Picture Association of America rates movies that use strong language as PG-13 or R so that parents are aware and can shield their children if they choose. The Federal Communications Commission doesn't allow broadcast channels to air profane language between 6 a.m and 10 p.m, coinciding with the times when young children are awake (though on cable they can curse whenever they want). Rap and hip hop songs are sometimes released with a "clean version" and Radio Disney frequently changes the lyrics to songs with curses in order to make them kid-friendly.

Part of the concern about using swear words in front of babies, isn't necessarily the choice of words, but the tone that is used with it. A curse thrown conversationally into a sentence may not even register with a baby, but one that is screamed, whether at another adult or at at the baby itself, can be very upsetting. Ronald E. Riggio, Ph.D. wrote in Psychology Today that, "It is clear that swearing can take the form of verbal abuse and harassment, and it is this sort of swearing that can be potentially harmful – a substitute for physical aggression."

Babies start to graduate from babble to learning to say words with attached meaning at around a year old. They may mimic you, so if you are swearing and they pick up on it and repeat it, it doesn't mean they are actually cursing you out. But keep in mind that your baby is hearing you and the words they start to learn likely come from you. Psychologists who interviewed thousands of subjects said that young adults report to have learned these words from parents, peers, and siblings, not from mass media.

Different families make different choices about the rules for foul language in their house. You need to find the balance that's right for your family, realizing that babies hear tone as well as content, and that sometimes they may bust out the F-bomb in the middle of a kindergarten farmyard rhyming exercise. And that's okay, too.

More Like This
The Best Travel Tips For Solo Parenting
Even If Your Baby Sleeps Better in Your Bed, It’s Still Not Recommended
When Does A Baby Recognize Their Father? A Pediatrician Explains
Winter Travel Tips For Families
What Parents Are Talking About — Delivered Straight To Your Inbox