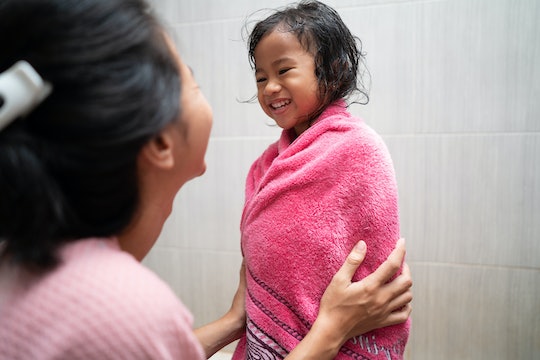 If you're the parent of a young child, you'll know all about the rigors and messes of bath time. Bathing your child requires a prodigious amount of accoutrement and time, not to mention more than a little patience. Yes, your bubble-covered baby is adorable, and it's hilarious when they shake their adorable booty as you try to wiggle them from the sudsy depths, but less cute is when they soak your phone, poop in the tub, or send all of the water over the edge in their splashing excitement. At some point you want to know when to teach your child to shower, because you're over it.

Teaching your child to shower, and them actually doing it successfully by themselves, is an important milestone, according to the American Academy of Dermatology (AAD). When you should teach your child to shower will depend upon when they're able to do it and get themselves completely clean, noted the team at Parents. Like many things involving children learning to do things for themselves, you're going to want to follow your child's lead. Some kids might be ready to shower alone in kindergarten, while others aren't ready for that for a few more years.

I remember vividly when my daughter began showering on her own. She was in pre-K and bemoaning the fact that she was forced to deal with the indignity of bathing with the curtain open, where she was unable to use her squirt gun freely. Her brother, three years her senior, had recently discovered that soapy water in a squirt gun was the perfect applicator for soap on one's person (seated, of course). My poor, aggrieved daughter was denied this specific childhood tomfoolery because I am horrible and did not want soapy water all over my bathroom floor. (I am old, and if I fall, my mid-30s body might get busted.)

Developmental pediatrician Janine Flanagan told Today's Parent that the biggest concern is over slips and water temperature. She noted that a first grader is likely unable to adjust their own water, while a third grader could do so easily. It might mean that for a while, there is some combination of supervision and freedom as they learn to shower. You might sit outside the shower, there to help wash hair and make sure the water isn't too hot, until they get a little older.

My daughter is now a rising second grader, and I find that I am still needed to make sure that she is properly shampooing her hair, which tends to become greasy and dirty fairly quickly. It needs to be vigorously washed, with the occasional lather, rinse, repeat.

Kids get distracted in the shower and their commitment to proper hygiene might not be perfect, so you need to intuit if your kids are washing all their bits and behind their ears before you set them off on their own to shower.

It's also pertinent to start teaching them a routine of bathing from the time they are very little. I used to hum, "start at the head, arms and legs are next, belly and toes next, once those are done then on to the rest." Now that my daughter's hair is long and tangly, there is also an entire detangling routine that happens as well. It's a process.

My son, on the other hand, is in and out in a handful of minutes if he's not listening to an audiobook, and seems to get everything clean, but that took years, and according to Today's Parent, that's totally normal and expected. When to teach your child to shower might not be the same for everyone, but the process is similar.

Teaching them the finer points of singing in the shower is a story for another time, though.