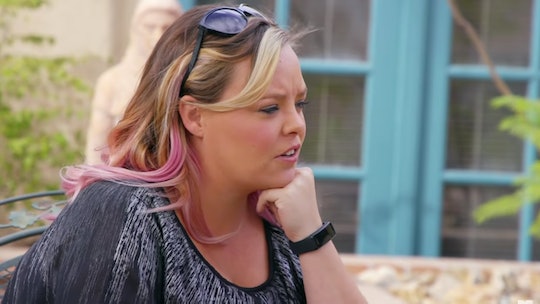 Mondays aren't easy. You need to get through them however you can, whether it's having that extra cup of coffee in the morning or unwinding with some reality TV at night. You might have worked Teen Mom OG into your Monday night routine, but you're going to have to change things up a little bit tonight. Due to the 2019 MTV Movie & TV Awards, the network's Monday lineup is being switched around. So you'll need to know when to watch Teen Mom OG, because it'll be airing at a different time.

Typically, Teen Mom OG airs every Monday on MTV at 9 p.m. ET. Instead, on Jun. 17 it will move up by one hour. You can catch it at 8 p.m. ET, which isn't too much of a schedule rearrange. At least the episode is still dropping on the same day! You won't have to miss a week of Teen Mom for the awards. In fact, getting all that drama an hour earlier might be a bonus. Your wait for a new episode just decreased!

A rerun will be airing the following day, Jun. 18, at 1:20 p.m. ET, so if you've got an afternoon free, then you could always watch "Blessings Not Baggage" then, too.

But if tuning into MTV doesn't work for you or you just prefer to stream, then there are some other options. The show may not be available on Hulu or Netflix, but you can purchase episodes on Amazon Prime, YouTube, or iTunes. You can also watch for free on MTV's website, but you will need a cable provider to sign in. That makes it a little tricker to catch up on Teen Mom OG, but not impossible.

And the third episode of Season 8 seems like one that shouldn't be missed, because it's an important chapter in the ongoing story of these four women. In "Blessings Not Baggage," Catelynn gives birth to her and Tyler's third child, whom fans may have already met on social media. People reported that their third daughter Vaeda Luma (who joined older sister Nova) was born on Feb. 21 of this year. But while you might have seen some snaps of her on Instagram, this episode will give you the full story of how she came into the world.

Elsewhere in Episode 3, Cheyenne begins seeing someone new, which Cory inevitably finds out about. It seems like this is going to be something of a pattern for the two of them. It's like all the tedious parts of a romantic comedy that get edited down to one upbeat montage; let's cut to the denouement already!

The episode summary doesn't offer an Amber update, but reveals that Maci is worried about her son Maverick's stutter because she thinks it may be a symptom of a larger issue. Until "Blessings Not Baggage" premieres, exactly what she's concerned about will remain a mystery.

Teen Mom OG might have jumped forward in MTV's Monday schedule, but fans should be able to watch it without upsetting their own plans too much.