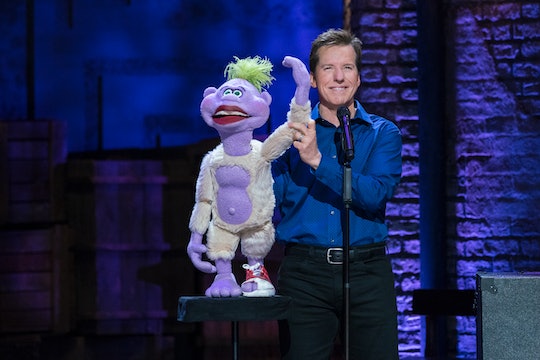 I Can't Get Enough Of Jeff Dunham & His Hilarious Puppet Act

Jeff Dunham brings his hilarious ventriloquist act to back to Netflix with his new special, Beside Himself. Through his quirky puppet characters and his witty jokes, the comedian takes on parenting, pink eye, and political correctness in a way only he can. If you’re curious to watch more of his act, you might be wondering when Jeff Dunham’s last stand-up special was and how you can watch it.

Dunham’s special, Relative Disaster, was released in 2017, and is available to stream on Netflix. Filmed at the Bord Gais Energy Theater in Dublin, Ireland, the special features all of Dunham’s beloved characters, as he tackles family and politics, including Hillary Clinton, Donald Trump, and how he feels now as a father to twins.

The comedian also reveals he chose Ireland as the venue for the special based on a DNA test he took, which revealed he was of Irish heritage. He uses the opportunity to introduce a special new Irish character, Seamus — a diaper-wearing baby that drinks whiskey and beer, and is a vocal Trump supporter.

Beside Himself was filmed at the American Airlines Center in Dunham’s hometown of Dallas, Texas, and in an interview with the Dallas Observer, the comedian talked about why he chose to bring the special home this time around. “I just knew the next Netflix special was coming, and I always pick the city in the tour, and I thought, 'Wait a second, why have I never ever done my hometown where I always began?'" said Dunham. "The audiences are always great, and we always pick a theater, but we've never done an arena and all my shows for the past 10 years have been nothing but arenas, so why in the world would I not put on tape what I've been doing for a decade?"

The new special features all of Dunham’s beloved characters, including Achmed, the boggy-eyed terrorist skeleton; Peanut, the hipster genius; the filter-less old curmudgeon Walter; Jose, the always-tired jalapeno, and the loveable southern trailer park kid, Bubba J. However, this time around, the comedian is bringing a new friend into the fold. His name is Larry, and according to Netflix, he’s a “high strung, chain-smoking, on-again, off-again personal advisor to the President.”

When talking to UPI, Dunham explained that he’s using Larry to navigate the complex waters of political correctness, because he feels it’s getting harder to poke fun at things without getting some kind of backlash. “With the political climate, it's really difficult for comedians now to talk about what's current without causing all kinds of problems," he said. "You can't open your mouth without getting yourself into some sort of trouble by saying what seems in the moment to be an innocent statement."

Dunham also told the outlet that while his act may tackle politics and culture, none of it is really controversial. "I'm not trying to pick fights or teach anybody anything,” he said. “It's supposed to be just fun. You don't have to be a Rhodes scholar to understand my show."

Not only is Dunham’s comedy fun and easy to understand, it’s also super easy to access. Both Relative Disaster and Beside Himself are currently streaming on Netflix.