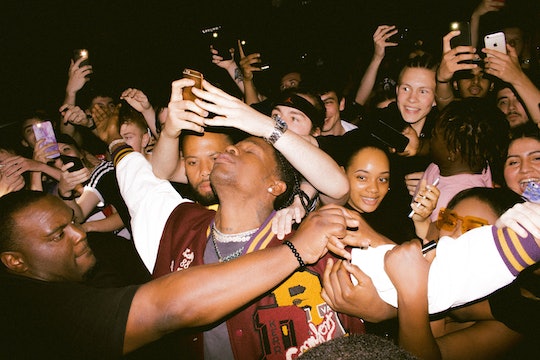 Travis Scott has been active in the music industry for about 11 years, but his popularity has grown exponentially recently for a couple of reasons. Netflix has released a documentary about his sudden skyrocket to celebrity, and after such a long career you might be wondering when Look Mom I Can Fly was filmed.

The film promises to strap viewers "into a front row seat of Scott’s life in the months surrounding the release of his Grammy-nominated album Astroworld," per Netflix's official press description. I don't know the exact dates of when everything was filmed, but I can make a few educated guesses.

Astroworld was released on Aug. 3, 2018. The film also follows Scott "performing at the Super Bowl and recreating Astroworld for his hometown and fans." Scott performed at the Super Bowl as a special guest of Maroon 5 on Feb. 3, 2019. So, I'm guessing most of the footage from the film was shot in the 6-month period between the album release and his Super Bowl performance.

But wait! There's more! The description also promises the doc will feature "footage from his live shows and nostalgic home video footage from Scott’s childhood." So, fans will get a glimpse of so many stages of his life along the way, culminating in the Super Bowl performance.

I'm not the biggest rap music fan in the world so I didn't know much about Scott before Look Mom I Can Fly was announced (beyond the fact that he's Stormi's dad). But watch just a few seconds of the film's trailer and you'll probably agree that he seems like a pretty amazing person. "He can vibe with every single person that's in the crowd," says one fan. That's right before a clip of Scott handing a sneaker to a fan at a show and saying, "Take care of these, all right?" Someone says, "he was the first person to let me know I wasn't alone" while another fan claims Scott saved his life.

He supports the message behind powerful music with powerful actions. The Super Bowl appearance that will be documented in the film was controversial among the rap community and activists because of the NFL's treatment of Colin Kaepernick. But Scott refused to perform before The League donated $500,000 in partnership with him to Van Jones' social justice organization Dream Corps, as reported by Billboard.

I'm intrigued by the events leading up to Scott's performance and how he handled them — but I also like babies and I've been known to indulge in a Kardashian deep dive every once in a while. So, I was excited to learn that both his girlfriend Kylie and daughter Stormi will be heavily featured as well. They're all over the trailer in private moments at home and while traveling. But they're also supportive in public moments, like when the crowd started chanting for baby Stormi instead of Scott at one of his concerts. He holds her at the side of the stage while laughing, Kylie at his side.

The best documentaries happen when people aren't afraid to let viewers in, and it definitely seems like fans are about to get an intimate look at Scott's life.

Look Mom I Can Fly is now streaming on Netflix.