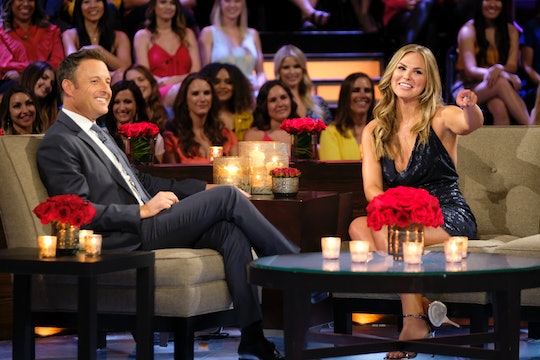 The Bachelorette's highly-anticipated "Men Tell All" special airs on Jul. 22, but given the tumultuous season Hannah Brown just had — not to mention the revelations that came out after filming on the show had ended — viewers may be wondering when the "Men Tell All" special filmed. Already, reports of Luke breaking down in tears afterward have surfaced, so let's take a look at the timing.

According to Us Weekly, Luke's brother Mike Parker went on Fox Nation on Jul. 18 to talk about what a challenge it was for Luke to sit in the hot seat before a very hostile audience during "Men Tell All." In that report, Us Weekly noted that the special filmed "earlier this month," which means it filmed sometime in early July. Bachelor spoiler baron Reality Steve reported that the "Men Tell All" special filmed on Jul. 12, which would have been right after the hometown dates episode aired. It was also after news of Jed's alleged secret girlfriend broke, but, of course, as is customary, the season's finalists won't be present during the "Men Tell All" special. They get to speak their peace during "After the Final Rose." ABC has already announced that it's spreading out The Bachelorette finale over two nights, so fans have plenty of drama awaiting them.

Luke's brother Mike teased a little bit of what fans can expect when Luke gets grilled, saying on Fox Nation:

I was in the airport to meet my brother after the filming of the "Men Tell All," and he was in tears. That was the first time that I’ve seen him...hurt on this show, I mean, throughout this whole process. And it was tough for me. It was tough for me to see him like that.

Mike claimed that what had upset Luke so much was the "concern" he showed for Hannah, the other contestants, and even Chris Harrison and the "Men Tell All" audience members.

“His heart just went out to them in that moment, and the way that they treated him, the way that they ambushed him,” Mike explained. “That was tough for him. He’s bouncing back, but that was a tough moment to see my brother in.”

It sounds like everyone in the studio came ready to hold Luke accountable for his behavior this season, and Luke interpreted that as an "ambush." For her part, Hannah told Us Weekly that she was "happy" with how her breakup with Luke unfolded, because it sparked an important conversation amongst The Bachelorette's viewership about slut-shaming.

Although it's very unlikely viewers will hear about Jed during the "Men Tell All" special, it's worth noting that, assuming Reality Steve's date is accurate, the special filmed after Jed spoke out about his girlfriend coming forward. He penned an Instagram post on Jul. 8 saying that he couldn't say anything about the allegations just yet, but he asked his followers to please stop harassing his family members in public over it. He promised that as soon as he was able to talk about it, he would. On the bright side, fans don't have long to wait before this season's sure-to-be-thrilling conclusion.