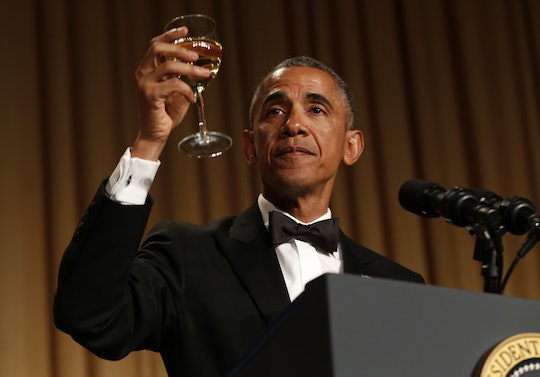 When Was The First White House Correspondents' Dinner? Traditions Date Back To The 1920s

President Barack Obama’s final White House Correspondents’ Association dinner will take place this Saturday, April 30, and the world of media is anticipating a night filled with one-liners and comedy bits delivered from Obama himself (in addition to appearances from a handful of A-list celebs and media personalities, of course). The dinner has transformed over the years from a strictly men’s only event to a night filled with performances, skits, awards and scholarships. With more than 100 years of history in the making, the event has turned into quite the spectacle. So, how did it all start and when was the first White House Correspondent’s dinner?

The annual White House Correspondents’ Association (WHCA) dinner began in 1920 — the WHCA marked its 100th anniversary in 2014 — and has become a tradition in the capital city. It's traditionally held on the last Saturday in April.

But all of the festivities we see today have their roots further back than that. Back in 1913, President Woodrow Wilson threatened to put an end to presidential news conferences after claiming some newspapers quoted him when he considered his comments off the record. This rumor did not sit well with the group of journalists who primarily covered the White House. According to the WHCA’s website, the correspondents got together and agreed on a code of professional conduct that they would all follow. Through negotiations, they were able to convince the president to change his mind. The WHCA organization was then founded on Feb.25, 1914, with the original mission to just keep Wilson from putting an end to regular press access.

While the mission of free speech and open media behind the WHCA has remained the same ever since, the structure of the WHCD evening has significantly changed over the years. Initially, the dinner was only open to men; That changed in 1962, when “First Lady of the Press” Helen Thomas convinced President John F. Kennedy to boycott the event until the ban on women was dropped.

Thomas' drive and commitment to the press was definitely worth it for her and future women in the media: Not only did she eventually succeed in garnering an invitation to the event, she became the first woman to hold the chief White House correspondent position and even had an HBO special document her journey before her death in 2013.

Over time, traditional news outlets have criticized the dinner, saying that the event had evolved somewhat off-tangent from its original focus, towards a more celebrity-driven occasion where the reporters take the backseat.

In 2007 The New York Times columnist Frank Rich implied that the newspaper’s staff would not attend the event anymore. He said the evening is “a crystallization of the press’s failures in the post-9/11 era."

"It illustrates how easily a propaganda-driven White House can enlist the Washington news media in its shows,” The Times claimed. The Guardian also published an opinion piece in 2011 which called the dinner “an unseemly schmoozefest.”

Aside from the dinner, the WHCA insists its journalists today share “the spirit of those early forerunners, pushing for access to the president and members of the administration amid the challenges of a modern media landscape.”

In fairness, the weekend will be about schmoozing to an extent, but there are also plenty of speeches scheduled to recognize more than the star-studded guest list, including those who have worked to prevent drug abuse and support recovery. The annual WHCA scholarship recipients will also be awarded the opportunity to take the stage and meet the president and first lady.

All in all, it looks like, true to tradition, there will be plenty of festive activities and moments scheduled for the week to keep the guests, both correspondent and otherwise, busy — and keep us at home thoroughly entertained.