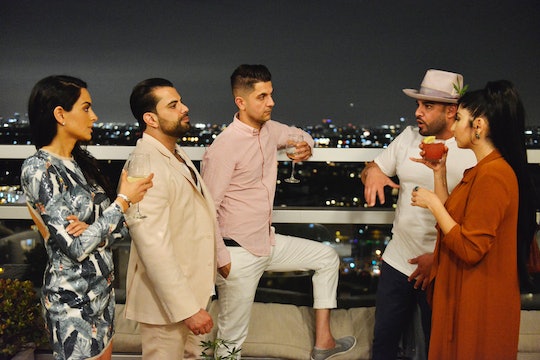 The finale of Shahs of Sunset Season 7 is set to air on Bravo on Nov. 8, closing out the season with Mercedes "MJ" Javid's wedding to Tommy Feight. But after the pomp and circumstance is done, there will be even more spectacle to enjoy come reunion time. The first part of the reunion airs next week, catching fans up on what's happened offscreen since the end of Season 7 — and maybe starting some new trouble ahead of Season 8. But when was the Shahs of Sunset reunion filmed?

When it was filmed is important, because that determines just how up to date the information in the reunion is. For it to be a useful update, it has to hit that sweet spot between seasons: it lets the cast address any lingering questions from the recently-concluded season while also teasing things to come in the future. It's a little difficult to pinpoint exactly when filming went down, but a little detective work can offer a viable theory. Cast member Mike Shouhed posted a picture of himself wearing a three-piece blue plaid suit on Oct. 12; a video of the cast preparing for the reunion shows him sporting the same (very memorable) ensemble.

If indeed the selfie was from the day the reunion was filmed, then that means it was shot a few weeks ahead of its Nov. 15 airdate. That definitely gives the cast enough time to catch up on the season and prepare their counterpoints once they're on the couches.

While getting ready to film, Mike explained why he chose such a unique look. "If you don't feel sexy in what you're wearing, you shouldn't be wearing it," he decreed. He wasn't always so bold, however:

Growing up I used to be afraid to wear, like, cool stuff because it was like, that's for the cool kids. You realize you need to do what makes you happy and that's what I love about this generation. It's like, there is no specific style. You can wear whatever you want and get away with it.

In addition to looking cool and giving Romper writers clues about filming dates, the reunion outfits of the Shahs of Sunset cast fit a specific theme. Golnesa "GG" Gharachedaghi revealed that they were recreating MJ's floral wedding theme to some degree, which was why she chose her gown. Nema Vand will be sporting a floral shirt, too. It seems the callbacks to Season 7 won't just involve the airing of grievances, but the wearing of flowers.

Bravo has released the seating chart for the reunion too, so fans can find out exactly where everyone will be positioned when they start dishing the drama. Though that may seem like a pointless detail, where everyone sits during the reunion of a Bravo show is actually super important. Consider it the passive aggressive modern cousin of a Jane Austen dinner party: it illustrates without words how loyalties have shifted, who is close to who, and who might be shouting across Andy Cohen once the evening commences.

In this case, Mike will be sharing a sofa with GG and Reza Farahan while Nema, Destiney Rose, and MJ sit on the other. That makes it seem like the newer cast members will be opposite the OGs, with MJ as the wildcard on Andy Cohen's lefthand side. Anything could happen during the Season 7 reunion special, and fans will have to tune in to find out what turns the evening takes.