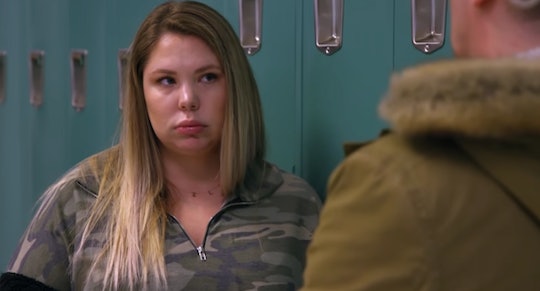 Teen Mom 2 has already concluded its ninth season, but it's not really over until everything gets hashed out one final time at the reunion. Typically, reality show reunions are filmed a little later than the rest of the season, to allow some time to pass first. That way, everyone can debut new haircuts or announce big life changes there. It's a chance to get updates on the cast ahead of the new season. You'll need to know when the Teen Mom 2 Season 9 reunion was filmed to be able to gauge how recent those updates are.

The Teen Mom 2 reunion will be split into three parts which air every Monday on MTV, starting May 20. While there haven't been official announcements about filming dates, there's no better way to pin down a timeframe than by cross-referencing social media. There's almost always a reunion selfie in someone's feed that was snapped around the same time as filming. This time, it was Leah Messer who shared the receipts. On Apr. 8, she posted a series of photos with Jeremy Calvert where they were both wearing their reunion ensembles. She captioned it, "At the end of the day, we will always be a team!" But the hashtags were the most telling. They were, as follows, "#teenmom2 #reunionweekend #somuchfun."

It seems like the reunion was filmed in early April, with almost two months passing before its premiere on MTV.

Another clue comes from the trailers for the reunion episodes. Several promos were posted on the Teen Mom 2 Twitter account that indicate the entire cast was present for filming, including Jenelle Evans. MTV cut ties with Jenelle in early May after her husband David Eason shot and killed their dog Nugget. As reported by Us Weekly, the network released a statement that read, in part, "We have stopped filming with Jenelle Eason as of Apr. 6, 2019 and have no plans to cover her story in the upcoming season."

If Jenelle was there for the reunion, then it must have been filmed before the Apr. 6 cutoff provided by MTV. Though Leah made her post on Apr. 8, she indicated that the entire weekend had been devoted to filming. Perhaps Jenelle recorded her interview portions on the sixth, which was a Friday. Shooting the reunion may have been her last day on the show.

And it was an eventful final day. In one of the promos, Jenelle is asked about "hateful comments" she posted on social media. In response, she storms off in tears. "I'm done with this bulls**t," she weeps as she leaves. "This is exactly why I didn't want to come here." But this isn't a Real Housewives faux-walk-off; Jenelle takes herself all the way backstage. She may have been ready to leave the show even before offscreen issues led to her dismissal.

The Teen Mom 2 Season 9 reunion may be the last fans see of Jenelle on the show, and it looks like it'll be a tumultuous end to her time as a cast member.