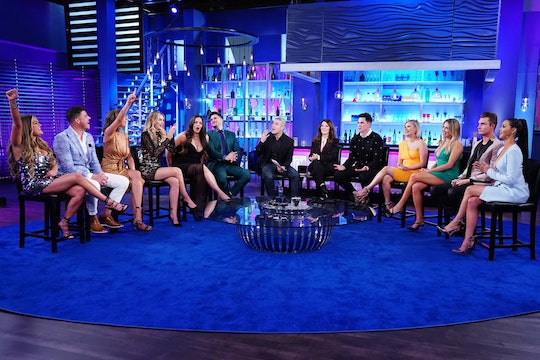 The Vanderpump Rules Season 7 finale is a three-episode spectacular of drama and arguing. The first part aired on Bravo on May 6, with Part 2 following on May 13 and Part 3 on May 20. Knowing when the Vanderpump Rules reunion was filmed can be helpful when figuring out the behind-the-scenes timeline. The reunions are usually shot some weeks or months after filming for the season has concluded, which allows just enough time for resentments to fester.

Typically, the break between filming the regular episodes and the reunion is lengthy enough that it gives the cast a chance to watch everything that unfolded all season long. They see what their co-stars have said in confessionals, and in other scenes; they get an objective look at how each fight played out. They're also active on social media during the break, possibly stirring up new disagreements with one another. That gap between filming gets everyone ready to reignite old feuds or start new ones at the reunion, so it usually films shortly before the reunion premieres.

Bravo didn't announce the filming dates, but with a little web sleuthing it's easy to deduce. Based on cast interviews and social media, determining the answer isn't hard at all.

At the reunion, Kristen Doute sports a sparkly nude cocktail dress with a plunging neckline, accessorized with a thick silver choker and some more delicate necklaces. It's an eye-catching look that's easy to remember. She posted a picture of herself on Instagram wearing the exact same outfit on Apr. 2; it was a selfie with co-star Brittany Cartwright that Kristen had hashtagged "#PumpRules." The background was also fairly distinct: the bright blue and pink lighting, as well as the bottles, matched the set of the reunion.

Brittany posted her own reunion filming photo on Instagram on Apr. 6. Her outfit is similarly easy to identify because it's a cool-toned sequined minidress; not the kind of outfit you forget after you see it. If Kristen and Brittany both posted during filming (or even within a few days of filming), then it stands to reason that the reunion was shot in early April. That's just speculation, of course, but it would make sense. It would give Bravo a full month to edit but is also recent enough that it's relatively up to date.

The Season 7 reunion promises to be action-packed. While speaking to Page Six, Lala Kent described it as "epic." She went on to say, "It was eventful. People were standing up and squaring off within 20 minutes." She even revealed that it was "one of the most difficult reunions that they’ve ever had to edit" because of how intense and combative it was.

Brittany also told Page Six that the reunion was especially stressful this year, though it wasn't all bad. "Everyone who was friends before are still friends," she said, which may mean that those who were on thin ice with each other didn't make it out on friendly terms.

The Vanderpump Rules Season 7 reunion may be the most shocking in the show's history, and because it was filmed so recently, you know the gossip is still hot.