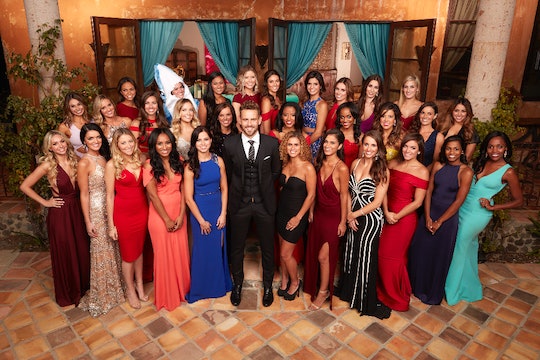 Nick's 'Women Tell All' Special Will Be Intense

One of the most highly-anticipated installments of any season of The Bachelor is the Women Tell All special (or, for The Bachelorette, the corresponding Men Tell All). Bach Nation shows are notorious for tricky editing and their propensity for making things appear not as they actually happened — all in the name of maximizing drama. With the Women Tell All – which airs every year after the overnights but before the finale — the eliminated contestants have the chance to set the record straight, confront Nick Viall, and divulge behind-the-scenes dirt. But when was The Bachelor Women Tell All recorded this season?

According to the contestants' social media accounts, the Women Tell All special was filmed sometime the week of Feb. 20, most likely on Friday, Feb. 24. The women of Nick's season, who (at least according to their various social media presences) seem to have become extremely close friends while filming and after, were clearly very excited to have reunited as a large group. Almost every contestant shared tons of photos and video clips in each of their Instagram Stories as they partied at the rose-themed Women Tell All afterparty. Which is apparently a thing and honestly looks like a ton of fun.

From the photos and videos, it appears that the vast majority of contestants showed up for the filming. Typically, some of the earliest eliminated and consequently less memorable contestants aren't invited back for the Women Tell All (or decline to appear), so viewers aren't likely to see some of the contestants eliminated on the first night.

While filming for the season wrapped back in November — you can tell since that's when the contestants (and Nick) resumed their social media posting — it makes sense that filming for the WTA episode would have been held until several months after. Though the season finished filming nearly four months ago, it didn't begin airing until early January. Now that almost the entire season has aired (and the contestants have presumably been watching along with fans), there would have been that much more for them to discuss and hash out during the revealing episode. Remember, the women wouldn't have known what they said about one another during confessionals until the episode actually debuted.

There are plenty of reasons to be looking forward to this surely explosive WTA. I'm sure that Liz Sandoz (who definitely appears in the episode, given that she's in several of the WTA after-party pics) will want to get some form of closure with Nick following her unceremonious dumping mid-date back in Week 2. I'll bet that Jasmine Goode will also have some words for Nick about her abrupt dumping, as will Kristina Schulman, Danielle Lombard, and Danielle Maltby. I don't know how long this episode will end up being, but I'm sure there's a lot of drama to unpack, given how untraditional (and, yes, dramatic) Nick was with his break-ups this season.