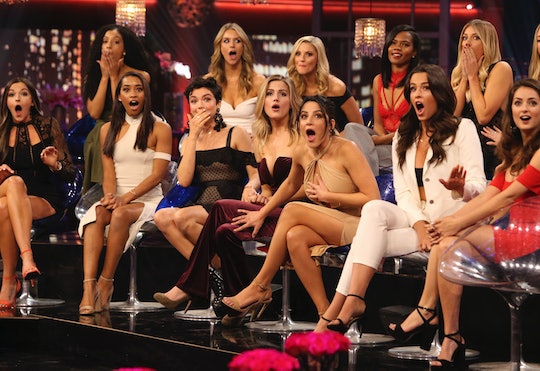 February is supposed to be the season of love, but sometimes it's the month when you're forced to look all the people you've rejected recently in the eye. Or at least, that's what Arie Luyendyk Jr. had to do during the Women Tell All special, which airs on Feb. 25. But when exactly did this all go down? When was The Bachelor: Women Tell All special recorded? Arie confronted all of his exes right before Valentine's Day because sometimes life is cruel that way.

The Women Tell All was filmed on Feb. 13, and will feature all the women you've grown to love (or hate) from the show. Usually since the Women Tell All airs before the final episode, the final two women are not present. This year, however, ABC is shaking things up a little bit by having the special air before the Fantasy Suite dates, in which Arie eliminates his third favorite woman. That means I don't expect to see Kendall, Becca, or Lauren B. in the audience at any point throughout the night. However, I am looking forward to hearing from some of my other favorites, namely Bekah M. and Jacqueline, who just seem like the type of women I'd be friends with in real life. Obviously, I'm also looking forward to the inevitable showdown with Krystal as well.

Arie has not revealed his current relationship status, though he has said on several occasions that he fell in love with two women during his time on the show. Variety reports that Arie said that a lot of stuff was missing from the show when he watched it back. He compared it to watching the movie version of your favorite book. A lot of stuff is still there but there are always some important bits that are missing. As far as the women who didn't make the final cut, well the Women Tell All special is their opportunity to speak out.

Will Tia confront Arie about why he sent her home after the hometown dates? Will Bekah M. ask if it was really just her age that caused Arie to send her packing? Will Krystal be successful in justifying her behavior and reviving her public image? If you need to know all of this stuff right away, there are spoilers all over the internet, but I'd prefer to wait and see how all of this shakes out in real time. It's more fun that way.

But perhaps what I'm most interested to find out is if this is when the show will announce the next Bachelorette. So far the internet is firmly behind two excellent candidates, southern sweetie Tia, and too-good-for-this-show Seinne. Then again, the next Bachelorette is often the runner-up, so maybe Becca or Lauren are going to be taking the lead. In this case, it's pretty obvious why the show can't announce the Bachelorette until the final episode has aired.

In fact, all I really know about the Women Tell All special is that it is going to be extremely dramatic based on the previews. Whether or not it's the "most dramatic Women Tell All ever," still remains to be seen. Promos for the special tease Bekah and Tia confronting one another about that time Tia bad-mouthed Bekah to Arie, as well as bringing Krystal into the hot seat where Arie says to her, "It's The Bachelor" which sounds promising. I'm most intrigued by the clip of Caroline looking Arie dead in the eye and saying menacingly, "I know what you did." What did Arie do, Caroline?