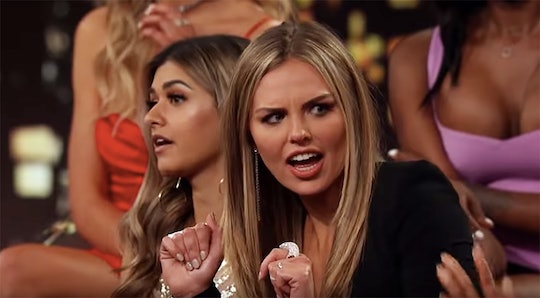 Here's When The Season 23 'Bachelor' Contestants Filmed Women Tell All

One of the best episodes of The Bachelor is the "Women Tell All" segment, in which the contestants reunite to stir up drama and hash it out with the season's lead. As for when this season's Women Tell All was filmed? Just a few weeks ago, the women vying for Colton Underwood's heart sat down to film the tense episode.

Additionally, Colton gave a statement on Feb. 22 regarding who he thinks should be the next bachelorette.

“In regards to the decision of picking the next Bachelorette, I wish the Bachelor and the Bachelorette had a say in that, they don’t, so I don’t know, “ he told Us Weekly at the taping. “I think there’s multiple women from my season that would make great Bachelorettes, whether it’s Caelynn or any… I don’t know, there’s a few women. So yeah, I just want to see all of them happy, so it’s hard to just pick one.”

BTW — as of Tuesday, there is no word about who is the next bachelorette.

When the Women Tell All was filmed, it was months after Season 23 wrapped. Colton's season went down in fall 2018, which means he has had some time to reflect on what transpired and those tough moments — aka jumping the fence.

Although it's not yet clear who Colton ended up with, Harrison did reveal his heart got crushed last episode when Cassie left the show. In case you missed the heartbreaking moment, the California native told Colton she wasn't ready for marriage and that she wasn't confident about her feelings for him.

"He was done. He got to a point where he thought he found everything he wanted. He was in love. And she literally crushed him. And he was just done. And he kinda snapped. And he split."

As for whether Colton quit after the fence jump, he confirmed to Us Weekly on March 5 that he stays after Cassie's departure.

“You see that, obviously, the story goes on and the show goes on and I think that I had a realization, ‘Life is not fair’ to myself,'" Colton said.

He added: "And then having a conversation with my family and my dad really helped put things into perspective. It was like, ‘You owe this to yourself and you owe this to these women to really explore and see where to go from here.’”

Of course, the Women Tell All addressed the fence jump, Cassie's true intentions, and that infamous conversation she had with fellow contestant Caelynn Miller-Keyes. And given the hot topics that were addressed, it's no surprise the contestants are still talking about the episode weeks after the Feb. 22 filming. This reunion was one heck of a ride to say the least, #BachelorNation.