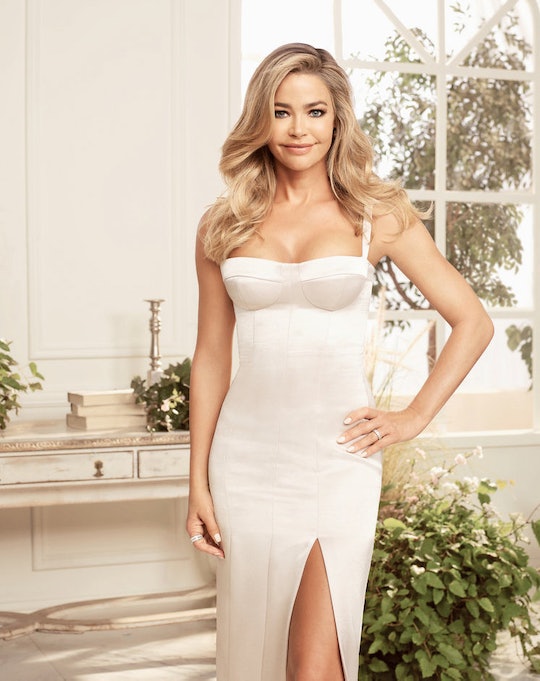 Actress Denise Richards joins The Real Housewives of Beverly Hills for Season 9, though this won't be her first foray into reality TV. Audiences might remember her short series Denise Richards: It's Complicated, though her offscreen life inspired a reality show for a reason. Her marriage to Charlie Sheen kept both of them in the news for years, but in case you forgot: when were Denise Richards and Charlie Sheen married?

According to People, Denise met Sheen in 2000 on the set of the movie Good Advice, though they didn't end up connecting until she appeared in a guest spot on Spin City. They were married two years later on Jun. 15, 2002. They welcomed their first daughter, Sam, in 2004, but Denise filed for divorce while pregnant with their second daughter, Lola, in 2005. ABC News reported that Denise alleged Sheen was unstable and violent, as well as addicted to gambling and sex workers. She claimed he visited pornographic sites that appeared to feature underage people. She also alleged that he assaulted her and threatened her life in 2005. He denied the claims, but was ordered by a judge to stay 300 feet from Richards and their children.

They briefly resolved their issues, though their divorce and custody battle stretched on into 2006. Their split became official on Nov. 30, 2006, per The Daily Beast.

Denise discussed their marriage in 2015 while appearing on Allegedly With Theo Von and Matthew Cole Weiss. She described Sheen as a "former bad boy" when they met, as he had been sober for four years at that point. Though their separation was complicated and occasionally acrimonious, they were on good terms at the time of the interview. And that seems to have continued to this day. In January 2017, Denise posted a photo of a dinner with Sheen and their daughters (as well as Denise's adopted daughter Eloise) on Instagram, captioning it, "We've had a colorful year ...at the end of the day we're still a family [sic]."

The good vibes extended to recent years as well. Denise recently married actor Aaron Phypers in fall 2018; while Sheen did not attend the ceremony, his rep told Entertainment Tonight that he "wishes them both nothing but happiness!" Sheen also commented on Denise joining the cast of RHOBH. Though he confessed to ET that he didn't watch the show, he knew that it was very popular and would be good for Denise. "I'm sure it's going to be a ball, you know?" Sheen said.

Though Sheen may still be a part of Denise's life because they share two kids, her marriage to Phypers will feature more on RHOBH. While chatting with Bravo's The Daily Dish about her wedding, Denise said that she was "so happy" to be officially married, adding, "I can't wait for everyone to go on this incredible journey with me this season on RHOBH. It has been a wild ride so far!"

Denise seems to be embarking on a new chapter of her life, and viewers will get to see all of it unfold on Bravo when the new season premieres on Feb. 12.