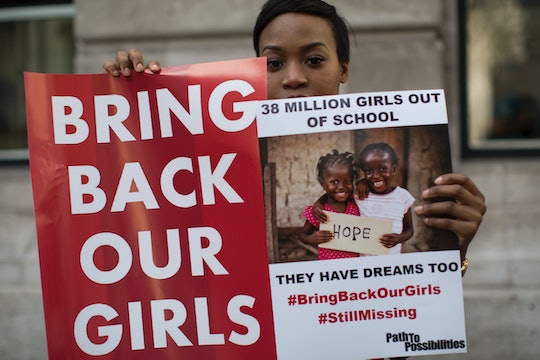 'Stolen Daughters' Reveals How The Chibok Girls Were Rescued From Captivity

Over two hundred girls were abducted from their boarding school in Chibok in Northern Nigeria in 2014. They were taken by the Boko Haram, a militant terrorist group that had kidnapped thousands, killed over 20,000, and displaced two million people since 2009. Half of the schoolgirls have since been released, so when were the "Chibok girls" rescued?

Of the 276 girls taken, more than 100 have returned following negotiations between the Nigerian government and their captors. But they weren't freed all at once, and some of them managed to escape from the Sambisa Forest where they were being held. According to The Guardian, 57 girls escaped not long after the attack, but Amina Ali Darsha Nkeki was the first girl to be rescued in May 2016. It was reported that she was found with a baby girl near a Boko Haram stronghold. She revealed that she had been running from an attack on a Boko Haram camp, and also told them six of the Chibok girls had died but the rest were still in the forest.

Mallam Mphur, the chair of the Chibok school the girls were taken from, told The Guardian, "When [Nkeki] arrived in Chibok, the people of the town were so excited, they were running everywhere to see her."

The BBC reported that two more girls escaped in September 2016 and January 2017, respectively. But in October 2016, there was the first group release: 21 girls were let go after the International Committee of the Red Cross (ICRC) brokered discussions between the Nigerian government and Boko Haram. With the ICRC's help, another 82 girls were freed in May 2017. While over a hundred girls are now recovering from their ordeal in safety, over a hundred are still missing. It isn't clear how many are still alive in the Sambisa Forest.

Some of the initial 57 escapees went to the United States to attend school; a few of the girls also received scholarships to the American University of Nigeria. PRI reported that six women graduated from the New Foundation School and eighteen were working through high school classes as of March 2017.

Most of the released Chibok girls live on a university campus in Nigeria four hours from their homes, according to the New York Times. There they receive counseling and education, though there are also many restrictions placed on them. The publication reported that they cannot leave their school campus without an escort and need permission for visitors. They also haven't seen their families very much since they returned home, outside of a holiday visit for a few weeks. Children they conceived and gave birth to while they were imprisoned are not allowed to stay with them lest they "distract from [the girls'] studies."

The story of what happened to the Chibok girls while they were being held captive is the subject of the HBO documentary Stolen Daughters: Kidnapped by Boko Haram, which will debut on Oct. 22. The film follows the women's lives in the aftermath of what they went through, and what the future may hold for them.