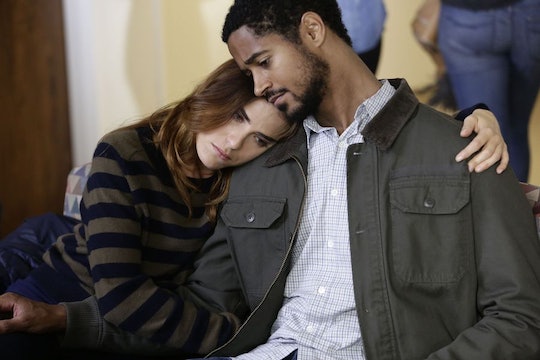 Just before the holidays, How to Get Away with Murder decided to break all of our hearts by killing off our favorite puppy, Wes. The show tricked us into believing he was safe when in reality it was him who was under the sheet the whole time. However, just because Wes is dead doesn't mean that's the last we'll see of him. So when will Alfred Enoch return to How to Get Away with Murder? Thankfully he'll be sticking around for the rest of this season.

Right after the midseason finale aired, Enoch appeared on Jimmy Kimmel Live! to discuss his leaving the show. Though he was just as disappointed by his character's death as I was, he was happy announce that he'll still be appearing in the second half the season in order to help find his murderer. As with almost every death on the show, fans now have to wait and see who killed Wes because, of course, nothing is ever straightforward.

Although Wes was in the house when it burned down, Nate found out from the medical examiner that the fire wasn't the cause of his death. Apparently Wes was already dead when the house went up in flames, which begs the question — at what point, from the time he left the police station to the fire, did Wes die and by whose hand?

Of course there are a lot of theories floating around out there, but some fans are still in denial that Wes is even dead at all. And while I'd love to believe this was all just a bad nightmare, I'm pretty sure Wes is a goner for real and now I just need to know who the heck is responsible for this tragedy. Frank seems like the most likely suspect, but that's why it's probably not him. If Bonnie didn't already kill Rebecca, I'd think it was her, but I just can't imagine the writers would have her kill yet another person. It would feel too repetitive.

There's also the possibility the murderer is someone we haven't met yet, like one of the Mahoney family members, but again that doesn't seem right. Shouldn't the murderer be someone Wes knows, so it's even more gut-wrenching when their identity is revealed? Unfortunately, we'll have to wait a while before we actually get some answers.

The search for Wes' killer begins this Thursday, Jan. 26 at 10 p.m. ET on ABC when How to Get Away with Murder returns.