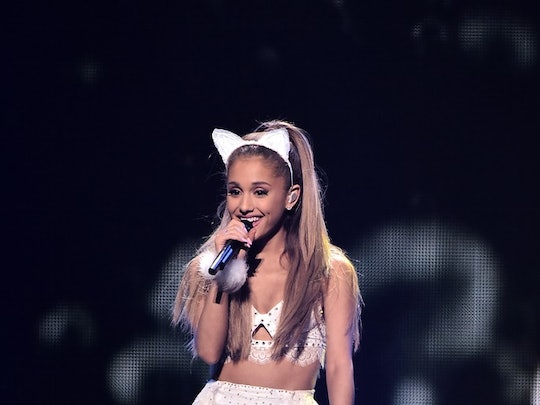 When Will Ariana Grande's Next Album Be Released? Fans Have Been Waiting For Months

News broke during the Super Bowl on Sunday that everyone's favorite half-cat, half-baby who's actually a full-grown human woman Ariana Grande will be performing at the 2016 Grammy Awards next Monday night. This stirs up a question that fans have been puzzled about for months now: when will Ariana Grande's next album be released? The first single, "Focus," dropped just before Halloween 2015, and the singer has been teasing the album release for months, telling a fan on Twitter that the album would be called Moonlight back in May 2015.

But now even the title is up in the air. According to Billboard, Grande told Jimmy Kimmel in January that she may have changed her mind. “A really long time ago, I was convinced that it was going to be called Moonlight, because its one of my favorite songs that we did for the album. And now, as we’re wrapping things up, of course I’ve been writing and singing, we’re at the final stretch… now there’s this other song that has thrown me for a whirlwind and I love it so much, it’s changed everything,” she told the late night host. So what is the title of this album, and when are we going to hear it? It remains a mystery, although Grande frequently drops clues about it.

But just because she's hinting on social media doesn't mean it's coming soon; she starting posting about the first track way back in June of 2015, a full four months before the song was actually released. "[B]y 'focus' i meant 'focus on me' #thisisahint #youllsee" she captioned one Instagram post, along with a flurry of emoji including a couple of moons (a reference to Moonlight?).

The latest hints are arriving via Snapchat, where Grande has been sharing short clips of another track, "Be Alright." according to MTV. But snippets aren't enough for her rabid fans; "WE WANT BE ALRIGHT" (yes, in all caps) actually trended on Twitter recently. And many fans are now admonishing the singer for even using the word "soon" in reference to the songs or the album. But "soon" seems to be all she's willing to share about her third album. It still might be called Moonlight, or it might go by the title of another song that Grande is currently refusing to give up. It might be released tomorrow, or maybe in another year. Maybe Grande herself doesn't even know. But one thing we do know is that she's definitely performing at the Grammys, so there's a good chance we could finally hear "Be Alright" in its entirety, at the very least. And that just might have to be enough to hold fans over for now.