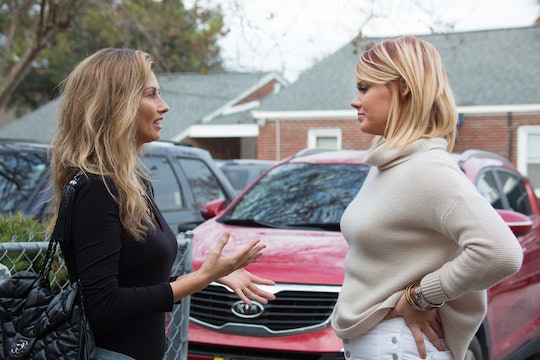 Ashley Jacobs' Return To 'Southern Charm' Looks Like A Disaster

Southern Charm just returned to Bravo for a sixth season, and among the surprises nestled in the trailer is the reappearance of Ashley Jacobs, who left the show last season after a number of huge arguments with the rest of the cast. Viewers eager to see what she stirs up may be wondering when Ashley Jacobs will return to Southern Charm, but it's not exactly clear which episodes she'll be in just yet. Southern Charm fans will have to wait for her to appear in individual episode promos to get a sense of when she'll show up. The good news is, there are plenty of clues to pick up in from the Season 6 trailer alone.

Fans can surmise that she shows up at two different events, which means she'll be in at least one, but possibly two, episodes. In one clip, she pops up at an outdoor event where Cameran Eubanks can be heard telling her, "You called Kathryn an egg donor," referencing the nurse's famous altercation with mother-of-two Kathryn outside a Patricia event in the Season 5 finale.

Later, she appears at a more formal event, where she can be heard yelling "Patricia, the truth will come out" at Patricia Altschul before being escorted out of the event by security. Drama! Intrigue!

The good news is, since these clips appear in the first trailer for the season, viewers can expect Ashley's return to take place in the first half. There's typically a new batch of teaser material that airs in the midseason trailer, and if her comeback was staged later on in the season, I think it's reasonable to assume that Bravo would hold onto that for a big reveal. Regardless of when Ashley returns, her visit to Charleston is bound to be explosive — even though, as some of her castmates revealed to Bravo's The Daily Dish, she was actually trying to get back into their good graces.

Cameran said in a May 2 podcast interview:

I figured the mature and the smart thing for her to have done after last year would have been to get on a plane and go back home to California, so when I saw her roll up at that party, my mouth was hanging wide open. I won't give away too much but she definitely tries to make amends and I think the viewers will have to wait and watch to see how we all react to that. So she wants in; she wants in the group really bad. It's kinda sad.

Fellow castmate Austen Kroll echoed the sentiment in another interview with The Daily Dish, expressing confusion over why someone who so clearly believed they were "losers" would want back into the friend group so badly. Austen also teased that Ashley doesn't go about reconciliation in the best way; apparently she struggles to acknowledge that what she said to Kathryn Dennis last season was wrong. If Ashley was hoping to smooth things over with a surprise appearance, it doesn't sound like she stuck the landing.

You can find out what got her dragged out of that party by security, though, when Southern Charm airs Wednesday nights on Bravo.