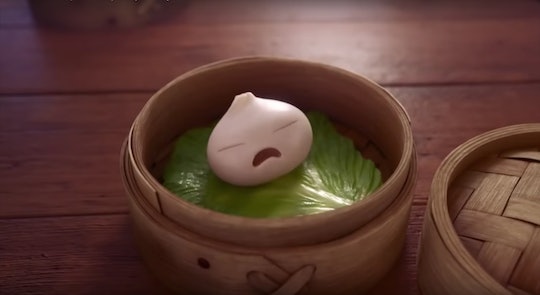 Here's When You *Might* Be Able To Stream 'Bao,' The Sweet Pixar Short About A Little Dumpling

It's hard to deny that Disney Pixar movies are some of the best out there. The films are entertaining, family-friendly, and oh-so-adorable, but the short films that play before the actual movies? Those are just as memorable and endearing. Recently, you've probably heard a lot about Bao, the latest in the adorable collection of Pixar shorts, which appears just before The Incredibles 2 plays in theaters. Because it's such a sweet story, you might be wondering when Bao will be available to stream at home or if you'll need to head to the movie theater to watch this cute dumpling make audiences totally weepy-eyed.

In case you're not familiar, Bao follows the heartwarming story of a Chinese-Canadian woman who doesn't have any children of her own, but magically brings an adorable dumpling to life and treats it as her own child, according to IndieWire. Bao was a perfect choice to show before The Incredibles 2, as both films focus on family bonds and relationships.

Given that it's really an adorable story — and only about eight minutes long —  it's understandable that you'd want to watch it again and again. But considering that The Incredibles 2 is still in theaters and Pixar doesn't appear to release its short films to streaming sites — in fact, short films are typically pretty hard to watch outside theaters, according to HuffPost — you might have a sit tight until somehow Bao is made available to stream.

For instance, even though Disney Pixar's movie, Coco, was released to theaters in November 2017, it hit Netflix as soon as May 2018, a six-month turnaround. However, it's worth noting that Coco's short film — Olaf's Frozen Adventure — wasn't released to Netflix with the animated movie.

When Bao will be made available to stream or watch outside the theater is tricky to predict at this moment, but something to keep in mind is that Pixar Animation usually releases a collection of its short films all at once every few years. Fortunately, once it's released, you can order the collection on Amazon and watch it instantly. Unfortunately, though, that might not be for another year or so, as the last short films collection was released in 2012. But since there have been a good number of Disney Pixar films released since then, like Coco, there might be a new short film collection coming out sooner rather than later.

If not, then there's also a chance that it could be available on Google Play and YouTube, sooner than in a short films collection on Amazon, like Pixar's short film Piper was in October 2016, about four months after it was shown before Finding Dory in theaters.

Also, perhaps when Disney launches its new streaming service, it's fair to wonder if it will include a selection of short films, or even show movies theatrically with their corresponding short films. Disney's streaming service doesn't launch until 2019, but that could be a possibility to catch Bao or other Pixar short films. So keep it on your radar.

Since The Incredibles 2 first hit theaters, audiences have been raving about Bao. It might be because Bao is different from other Pixar shorts, so much so that the short film's director, Domee Shi told IndieWire, that she wasn't sure if it would get approved. In an interview with IndieWire, Shi said:

I was afraid that it would be too dark and too weird of a story to tell at Pixar, but I pitched it to Pete Docter [Inside Out] and he became a champion. He said it was cool and different and encouraged me to keep the twist ending.

TLDR; it doesn't appear that Bao is on any streaming platforms right now, unfortunately. But give it some time and it will hopefully makes it way there soon. In the meantime, it might be worth seeing it in theaters while you still can.