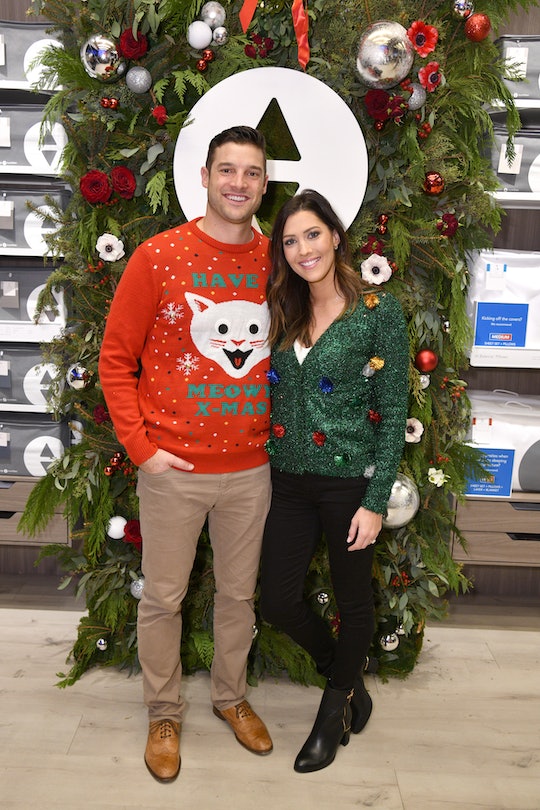 Becca Kufrin ended her season of The Bachelorette engaged to Garrett Yrigoyen, but they have yet to tie the knot. Fans might be hoping for an update on their relationship status during the upcoming Bachelorette reunion, which brings back 12 of the previous stars to celebrate all 15 seasons of the show. It airs on ABC on May 6. It'll be a way of revisiting the show's past, but also getting some insight on Becca's future and maybe finding out exactly when Becca and Garrett will get married.

In an interview with People, Becca and Garrett were happy to share a few details about their upcoming nuptials — including the fact that she's not walking down the aisle any time soon. They had been traveling so much in the wake of the show that they hadn't really had time to settle down. Visits to Garrett's hometown and his family had them zipping from Reno to California. Then they decided to go house-hunting, with hopes of finding somewhere to live in San Diego by Garrett's brother. A wedding ended up taking a backseat.

But Becca and Garrett also weren't looking to rush. They got engaged so soon after meeting that they still needed to get to know each other before they made things official.

Becca told People that any wedding was going to take place "very far in the future." Though she and Garrett had some ideas for the big day, they hadn't pinned down any of the specifics. "No dates, no venues or anything yet," Becca said. "We'll give it some time. One thing at a time."

The entire goal of The Bachelor and The Bachelorette may be to get a ring on somebody's finger, but it makes sense that Becca and Garrett would want to slow things down now that they don't have to worry about sticking to the show's timeline. Now they can see how they work as a couple in the real world, which is a pretty logical way to go about things.

Becca and Garrett seem to be enjoying their time together, too. Their Instagram accounts are full of coupley photos with emotional captions, as well as a little bit of wedding planning advice. In what was potentially (but not explicitly) an advertisement, Becca shared a PSA for anyone who needed help planning a ceremony. She said that Total Wine had complimentary tastings and drink coordination, which she and Garrett took advantage of. Now they would be "all set when our day finally comes," though she left the date up to audience participation. "Any guesses on when that'll be?!"

Becca and Garrett have also had something of a dry run for their big day. In December 2018, they did a bridal photoshoot featured in Us Weekly that explored one possibility for their future wedding. They wandered around a sunny field in some Pinterest finery, which included Becca in a lacy bohemian gown with armfuls of flowers. It wasn't the real thing, but it seems to be the closest approximation that fans can expect for a while.

Becca and Garrett's wedding is still in the early stages, but it looks like they're more than prepared for exchanging vows.