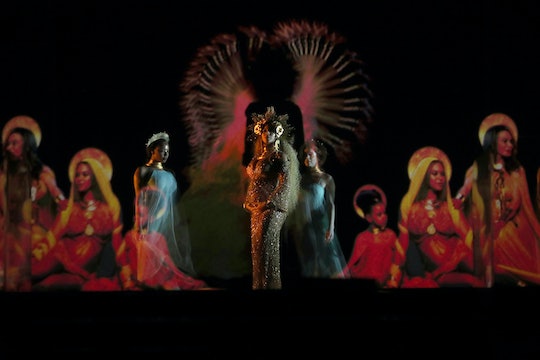 Now That The Twins Are Here, Will Beyoncé Go Back On Tour?

The world stood still Saturday night, and Beyoncé fans everywhere held their breath as news broke that the singer — an all-around goddess, mother of Blue Ivy Carter, and spouse to rap mogul Jay Z — had reportedly given birth to a healthy set of twins. The highly anticipated duo reportedly came into the world on Monday, June 12, according to Us Weekly, forever changing the dynamic of America's royal family. However, as exciting as the news of two more mini-Beys and Jays is, there are still a lot of logistical questions that remain for her devoted fans. For instance, will the couple take some time off to spend the rest of the year enjoying parenthood? When will Beyoncé go back on tour now that the little ones have arrived, or will she give herself a well-deserved break?

Well, the world will probably have to wait a while for another Beyoncé performance, it seems. Bey hasn't released a new album since Lemonade, and her Formation World Tour wrapped up in October of 2016. So, until the Queen releases new music, there isn't really any sign that the singer will be going on another world tour any time soon.

However, if you clicked on this article looking for some hope that you could see Beyoncé perform live soon, don't give up just yet. Back in 2012, Bey performed at a four-night residency in Atlantic City for the "Revel Presents: Beyoncé Live" concert series a mere four months after she gave birth to daughter Blue Ivy. And she's already planning to return to next year's Coachella lineup, given that she had to cancel this year's performances on doctor's orders.

So, while there haven't been any formal announcements, there could still very well be a few live Beyoncé performances in the coming months. If the new mom of three doesn't drop any new music this year, she could still make an appearance at an award's show, or at another residency or television special you can try to catch.

On the other hand, it wouldn't be out of character for Beyoncé to drop a surprise album, like she did with Lemonade. Seriously, for all anyone knows, there could be new music coming our way any day now, as a special edition set to go along with whatever Instagram announcement she decides to post (please let there be an Instagram announcement).

Releasing new music, or going on tour soon after giving birth wouldn't be the most surprising thing Bey has done, at all. Time and again, the singer has proven that nothing will keep her back from doing what she loves. In fact, there have already been reports that she'll be starring in the live-action Lion King remake, although that would only require some time in the studio. Nevertheless, it's clear that this mamma isn't one to settle down any time soon.

In all seriousness, if the reports are true, Queen Bey did just deliver two small humans, and she probably looked flawless the entire time, so if anything, the superstar deserves a break. And Jay Z, little Blue, and the twins all probably agree.